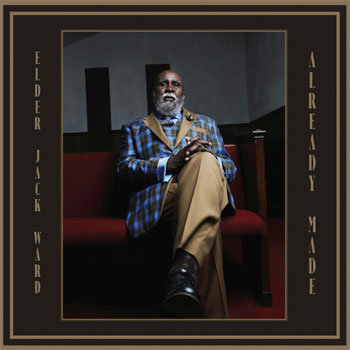 Growing up as a suburban white kid, my preconceptions regarding gospel music were fairly well-formed. I wasn’t especially receptive to the messages conveyed in the music, and – on the rare occasions when I encountered it – I found the music stiff and lacking in passion.

Of course I wasn’t hearing music coming out of an African American tradition. At its best, that stuff is on fire! As 20th century music historians could tell you, the genre that we call soul is really a secularized version of gospel. The real gospel music has tremendous overlap with blues, soul, R&B and rock. At its best it’s full of the passion often found lacking in its based-on-European-traditions caucasian counterpart.

Speaking of “at its best,” Elder Jack Ward’s Already Made has all of the qualities that make for a successful album. Commitment to the material, inspired vocal work, tremendous ensemble musicianship: they’re all in ample supply on Already Made.

Yes, the subject material is the Big Guy, but experiencing this music is really no different than listening to your favorite soul artist sing about his or her love interest. The backing vocals have that robed-chorus feel, and songs like “Shout Trouble is Over” are hypnotic; who knew so much could be conveyed with a single chord?

The rhythm section features guitarist Will Sexton and ace drummer George Sluppick, names familiar to in-the-know fans of current-day Memphis soul. Elder Ward himself has an impressive back story, and he applies his natural gift for lyric writing in this collection of ten original compositions. Highly, highly recommended, and I wouldn’t be surprised to be hearing about this record come Grammy time.