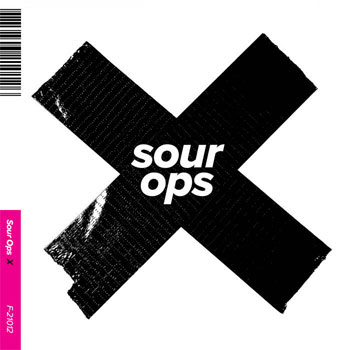 Readers of this online music magazine will know that while I approach it with guarded optimism, I do like me some power pop. They’ll also agree that the term is oft-abused, so much so that quite a few artists who might fit into the category instead abhor the term. They refuse to be thus labeled, as is their right. Here’;s an exception. Nashville-based Sour Ops proudly embrace the term.

Thing is, I am not sure I agree. There’s swagger and power in their songs, and plenty of hooks, but Sour Ops don’t sound especially influenced by Badfinger, Big Star etc. I hear more of the wonderfully glammy excess of T. Rex and Slade in tunes like “Do You Wanna Be Like Them?”

But that’s all largely beside the point. The tunes are strong, the hooks sharp, and there’s a sense of exuberance (but not immature giddiness) to the ten tracks on X. Price Harrison’s lyrics are more intelligent and incisive than the standard-issue p.p. band, too, and that means that while you’ll thrill to the highly-charged rocking rhythms of cuts like “I’m an Animal Too” (which does, now that ya mention it, sound just a tad like the Raspberries) you can consider “Out of Place,” a song with a thoughtful perspective. And – unlike too many power pop bands, these lyrics won’t embarrass you if you’re caught singing along.

Through most of X, Sour Ops is a lean and mean trio: Price plus drummer George Lilly and bassist Tony Frost). Guests help out here and there – Niqui Gutierrz’s saxes on “Inside the Mind” recalls The Sonics, which is something great to call – but for the most part, a spare, in-your-face rocking band is the ideal delivery system for these tune. Razor-sharp guitars slash and burn, though lead breaks are kept to a minimum. The rhythm section is tight and splashy. Whether you’d consider it power pop or not, do check out X.