Album Review: The Orange Peels — Celebrate the Moments of Your Life 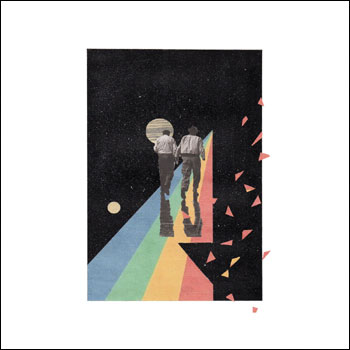 One never quite knows what to expect from The Orange Peels, and within that uncertainty lies a part of the group’s charm. They certainly don’t fit neatly into any particular musical subcategory, be it power pop, art rock or anything else, but hints of those styles make themselves known within the context of individual songs. Allen Clapp, Jill Pries and Gabriel Coan make intelligent music that’s possessed of immediate appeal – that’s the pop part of their collective sensibility – but The Orange Peels create music with depth, music that reveals itself fully only through repeated, close listens.

And they subvert expectations at every turn. Who other than they would open an album with a cut like “2X2,” a track that – if it’s redolent of anything else – might remind listeners of the kind of post-false-ending coda that characterized late-’60s psychedelia. The squalling lead guitar, the alluringly lumbering, lysergically-inclined drumming, the droning vibe. The track sounds like the kind of thing Robyn Hitchcock might have done in his Egyptian period. But the vocal harmonies add a Mamas and The Papas feel to the song; one can almost see the colorful kaftans and smell the sandalwood incense. And when the guitar solo shows up, it may conjure a mental picture of Steve Hillage covering George Harrison’s “It’s All Too Much.”

And after all that, we’re only three minutes into Celebrate the Moments of Your Life. Now, why on Earth this group – formerly based in Northern California but since relocated to the U.S. Virgin Islands – would take an album name from the tag line of an advertising jingle for flavored instant coffee? This I cannot answer. But playful, off-kilter humor has always been part of the complex blend that is The Orange Peels.

The shimmering keyboard textures of “Give My Regards to Rufus” suggest the crystalline productions of Paddy McAloon’s Prefab Sprout circa Two Wheels Good (or Steve McQueen if you’re British). I also hear hints of Shelleyan Orphan’s work around the time of 1989’s Century Flower. The hypnotic, keening strings create an ethereal urgency (pardon the oxymoron), if such a thing is even possible.

Skittering electronic drum beats, faraway and sustained guitar and friendly harmonies all add up to the wonderfully idiosyncratic “Birds Are Louder.” Building on an avian theme, “Larkitecture” is an exercise in strangeness, with an unexpectedly mechanical vibe that makes me think of Suzanne Vega’s gutsy and experimental 99.9F°. The mix – full of throbbing bass and clattering percussion – feels like it’s informed equally by Tears for Fears’ The Seeds of Love, David Bowie’s Aladdin Sane and Flaming Lips’ The Soft Bulletin. Yet – and this is key – The Orange Peels don’t lose themselves in the process; the assimilate their influences and create something that sounds like them and no one else.

“Little White Bird” has shades of Burt Bacharach and Paul Williams, with a hint of Leonard Cohen and Bill Pritchard. And with that, you’ve experienced but one of the four sides of what in vinyl form would surely be a double LP. (Note: apparently there is a vinyl version!)

Recorded in California (before the move) and Philadelphia, the album is more the product of the trio of Clapp, Pries and Coan than past Orange Peels albums; there have been times – as in the 2020 period – when they were more or less a group. But the artistic and creative vision is the thread that connects all of their work. Guest spots are always employed to add something special, be it the string section of “Give My Regards to Rufus” and “Solanium” or the otherworldly guitar samples on “Larkitekture.”

The impressionistic “Two Shores” makes the point that even without vocals and lyrics, The Orange Peels are capable of painting evocative aural landscapes. “Human” – a tune worthy of The Church’s peak period – demonstrates their facility for creating hooky and memorable pop songs. “Mindego Hill” is a tasty slice of mid-’60-styled popsike. “Magical Thinking” provides the closest thing to a straight continuation of the sonics and arrangements of (here I go mentioning it again) 2020. “From the Rosemary to the Rose” is so lush and expansive it all but begs to be heard though headphones.

Any double album worth its grooves ought to have an ambitious, three-part suite, right? If you agree, you’re in luck: Side Four of the album features “From the Sunflower to the Nightshade,” ten-plus minutes of wonder. The first part, subtitled “Helianthus,” is instrumental. The second part, “Every Garden Grows” is a lovely, waltzing construction with countless keyboards, each finding its perfect place in the mix among Clapp’s stacked vocals. The too-brief guitar solo is reminiscent of Robert Fripp’s work with Brian Eno. The third part of the suite, “Solanium” combines early analog synth textures with sophisticated chamber instrumentation into a meditative and melancholy piece.

Having achieved that, some artists would have contented themselves with ending their double-opus right then and there. But The Orange Peels never take the obvious route. Instead, Celebrate the Moments of Your Life concludes with another long piece, the more conventionally-structured “Pastels.” It’s seven-plus minutes of impossibly tuneful art-pop, a textbook example of combining pop values and arty ambition. Some of the sonic choices in the track might lead one to – momentarily– think of the term shoegaze, but somehow that doesn’t quite work here. Instead let’s call it skygaze. Yeah, that works.

As I’ve observed many times before, some bands build a career out of making a good (maybe even great) album and then making it again and again and again. There’s a kind of wisdom in creating that kind of consistency. But it doesn’t take chances. Taking chances – doing something different each go- round – is a trickier and riskier approach, because one runs the chance of (at worst) alienating the audience who dug the earlier stuff or (at best) failing to inspire and/or engage those listeners who wanted, well, more of the same.

By now you can guess which path I believe the Orange Peels have chosen. And from my perspective, that means that while they’ve never failed to deliver an interesting and creative release, some of their output hasn’t captured my imagination to the degree than 2020 did; released some 11 years ago, that album remains near the top of my list of great releases. And while it’s pointless, really, to compare albums in the which-is-better sense – hey, just enjoy them all – with Celebrate the Moments of Your Life, The Orange Peels have made an album that deserves mention in the same breath as their 2010 release.

And I’m not the only one who thinks so. “2020 (album no. 4) was us realizing everything we’d explored on our first three albums,” Allen Clapp wrote in a note to me. “And the new one (album no. 8) is us doing the same thing, only with greater hindsight. If 2020 was like us graduating from high school, Celebrate the Moments of Your Life is like us graduating college.”

There is a maturity, a sense of having experienced more of life, along with the dents and dings that come with it – in these songs. But the indefatigable sense of wonder, the sense that a recording studio is a place to bring forth the magic, pervades the record. Celebrate is the kind of record one doesn’t simply listen to; it’s designed to be experienced. And after a decade-plus of raving about 2020 to most anyone who’d listen, I must say that with their latest record, The Orange Peels have – for at least the second time – created the best album of their career.