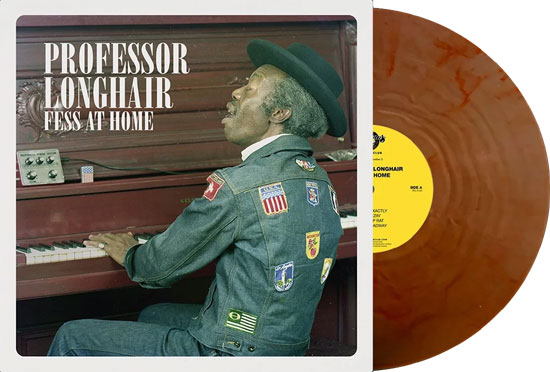 This intimate recording absolutely sparkles. You are right there at Tipitina’s in 1973 as Henry Roeland Byrd (Professor Longhair, or “Fess” to those in the know) stretches out for a rollicking performance on the piano, aided and abetted wonderfully by percussionist Alfred “Uganda” Roberts.

The good professor’s vocals are somewhat indistinct for the opener “Tipitina,” but his piano magic is what got people in the door. The aptly-named Fess at Home presents the professor in the best possible light: at the piano, with a minimum of distractions. He runs through a delightful set of standards and obscurities, including an instrumental reading “Rum and Coca Cola,” popularized by the Andrews Sisters (and written by Morey Amsterdam, whom listeners of a certain age may remember from The Dick Van Dyke Show.

The thing about Professor Longhair is that he made nearly every tune sound as if he wrote it. And when he didn’t, he made it sound like it was written for him. He bends every song to his inimitable style, adding whistles to estabvlish the lead melody on “Big Chief,” for example.

And after warming the audience up with a few standards, he switches gears and presents a clutch of his own material, including “Mean Ol’ World,” “How Long Has that Train Been Gone” and “Her Mind is Gone.” In the second half of the set, he sprinkles a few more covers into the gumbo, including Fats Domino’s “Whole Lotta Loving” and the blues standard “Everyday I Have the Blues.” All the while, Roberts’ hand percussion adds thrilling texture to the proceedings; as great a master musician as Fess was, Roberts deserves equal billing here.

This release – part of the Tipitina’s Record Club offerings – features a liner note essay by David Kunian, Music Curator at the New Orleans Jazz Museum. It’s quick yet essential reading. And the dazzling translucent gold vinyl pressing is the icing on the cake.