Rodrigo y Gabriela Take on Jazz, Metal and the Future

Though their music is rooted in acoustic flamenco guitar, Mexico City-based instrumental duo Rodrigo y Gabriela are open to – and draw from – the entirety of popular and traditional music. Across more than two decades, six studio albums, three live releases, three EPs and countless live dates across the globe, Rodrigo Sánchez and Gabriela Quintero have bent the music of other artists to their own unique purposes.

While the majority of Rodrigo y Gabriela’s material is original music, the duo’s choices of covers provide a window into their all-encompassing musical worldview. Bay Area metal heroes Metallica were one of the first acts to see their music reinterpreted into what some call Rod y Gab’s “acoustic speed metal” style. Metallica’s 1988 anti-war single “One” appeared on Rodrigo y Gabriela’s major label debut, 2002’s Re-Foc. 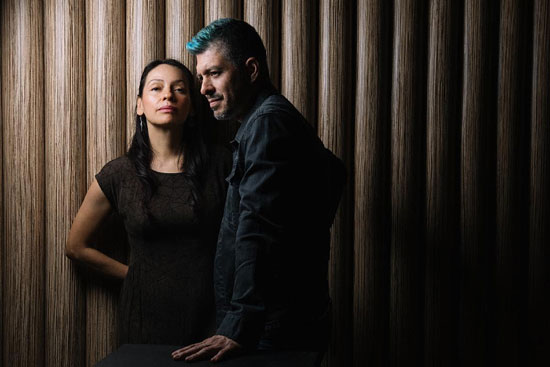 But alongside metal covers, musical omnivores Rodrigo y Gabriela have surveyed the musical landscape and discovered other styles ripe for recasting into their inimitable style. The duo has interpreted the work of artists as varied as Paul Desmond (“Take Five”), Led Zeppelin (“Stairway to Heaven”) and Pink Floyd. That last group was paid tribute with a mesmerizing acoustic reading of their early, epic-length masterwork “Echoes,” complete with the song’s signature ping tones at its start and finish.

Rod y Gab’s 2019 album Mettavolution earned a Grammy (Best Contemporary Instrumental Album), and the duo embarked on a widely-acclaimed tour in support of the record. In late 2020 – with their tour sidelined by the pandemic – the pair of guitarists released an audio document of that tour, Mettavolution Live. That CD captures the excitement of a Rod y Gab concert. “On the best nights,” Sánchez says, “the audience is part of the band. It’s the energy we draw from the fans, I think, that makes the difference.”

Live albums are sometimes stopgap projects, something for the fans when there’s no new music ready for release. But that’s not the case for Sánchez and Quintero; they haven’t been idle since their tour was interrupted. Recent months have also seen the release of two new thematic EPs, Jazz and Mettal.

“Anyone who knows us will understand that we both listen to lots of different kinds of music,” explains Sánchez. “We are long time fans of Astor Piazzolla; we used to play his ‘Libertango’ a lot in the early days.” Jazz also features reinventions of Kamasi Washington’s “Street Fighter Mas” and Snarky Puppy’s “Lingus.” Sánchez provides a simple reason for the new recordings. “We are fans, first and foremost,” he says. “The challenge – and the fun – is taking those songs and arranging them for two guitars.”

Before teaming up in 2000, Rod y Gab both played electric guitar in metal bands. The Mettal EP revisits those roots. Another Metallica tune (“Battery”) is joined by readings of songs by Megadeth and Slayer. In Rod y Gab’s hands, the songs display a melodic depth equal to their formidable power. “That generation of thrash-metal bands are absolutely integral to the history of Rodrigo y Gabriela,” Sánchez says. “So when we approached it, we knew it had to be 100% sincere and respectful as a tribute.”

The duo recently launched a Patreon platform, Music From the Field. “It has been an outlet for all different kinds of musical experimentation,” Sánchez says, “from covering Dua Lipa and taking on Nina Rota’s music from The Godfather.” And that eclectic approach is likely to continue for him and his musical partner. “I wouldn’t rule out future genre-based EPs,” he says. “We are both endlessly curious about music.”

Rodrigo Sánchez makes it clear that while COVID-19 interfered with Rod y Gab’s plans, the duo has maintained plenty of momentum. “When the pandemic happened, we moved to doing sessions online to reach the fans,” he says. In addition to those sessions – broadcast from “The Spaceship,” the duo’s purpose-built studio in Ixtapa – plus the live album and pair of EPs, they’ve released yet another recording. Rod y Gab’s latest single is a sublime version of “Te Extraño,” written by acclaimed Mexican composer Armando Manzanero. “His music was a constant on radio and TV at home when we were kids,” Sanchez says.

The current run of live performances is part of the duo’s continued forward motion. “Building The Spaceship and doing online sessions every week kept us sharp,” Sanchez says. “But we’re excited to be back out on tour, and we’re feeling very positive about the future of our music.”