Mushroom: Don’t Sit This One Out 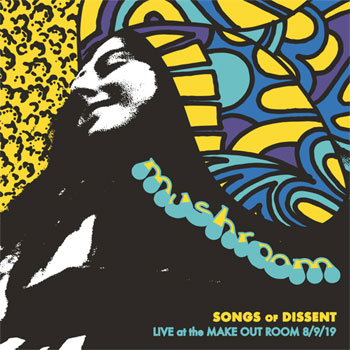 When critics try to describe Mushroom, they call upon labels like krautrock, free jazz, freakout, ambient and electronic. Launched in 1997 by drummer Pat Thomas, Mushroom is all of those things and none of them. The San Francisco instrumental collective played its first-ever gig at The Make Out Room; now, more than 24 years later, the group returned to that venue for a show in celebration of Songs of Dissent, its first album in more than a decade.

There’s a playful sensibility at work when putting together Mushroom albums. Thomas has a habit of quoting from lyrics of classic and progressive rock tunes. To wit: 2010’s Naked, Stoned & Stabbed quotes The Who’s “Bargain.” Really Don’t Mind if You Sit This One Out is the opening lyric from Jethro Tull’s 1972 Thick as a Brick. And Songs of Dissent includes a track called “Two Men Say They’re Jesus, One of Them Must Be Wrong,” a phrase drawn from Dire Straits’ “Industrial Disease.” Another new tune is titled “Kraut Mask Replica.”

One could argue that it’s a tic only a music journalist could love. The thing is, Mushroom never, ever sounds like Dire Straits, Elton John or The Who, and only rarely a bit like Jethro Tull. More relevant stylistic touchstones might include Can, Guru Guru or – in Mushroom’s jazzier moments – Les McCann.

When the term is used properly, supergroup refers to a band lineup featuring individuals who have already made names for themselves. In the jazz idiom, the concept is both more common and less rigid: classic jazz combos like the one that made Cannonball Adderley’s landmark 1958 LP Somethin’ Else existed for only one day.

Mushroom has one foot in rock, the other in jazz. By rock standards, it is something of a supergroup, counting Camper Van Beethoven multi-instrumentalists David Immerglück and Victor Krummenacher among its participants. But the ad hoc jazz approach is key to the Mushroom aesthetic: the group has also seen free jazz giant Eddie Gale, British psychedelic rock legend Kevin Ayers and Thomas’ fellow music historian Alec Palao pass through its ranks.

“We’re far from one of the most popular bands,” says Thomas with wry understatement. “But after 25 years, we’re kind of a San Francisco institution.” He notes that to date, Mushroom has had more than 40 members. He’s the common thread that runs through the collective’s body of work, but the music is the product of real-time creative and spontaneous collaboration. The free-wheeling, improvisational nature of the group’s music ensures that no two shows are ever the same. Like most of the albums in Mushroom’s catalog, Songs of Dissent is the recorded document of a live performance, this time an August 2019 return to The Make Out Room.

Mushroom’s origins are as against-the-grain as its music. In the 1990s, Thomas was making a go in Europe as a singer-songwriter. “I did three German tours and three albums where I was kind of pretending to be Dylan or Lou Reed,” he quips. But he says that as that decade neared its end, German audiences collectively decided that “they hated singer-songwriters.” So rather than make a crass, calculated shift into classic country, he headed in another direction. “I decided that my next career move/musical progression would be an all-instrumental band with me as the drummer and band leader,” Thomas says. With the help of Immerglück and Krummenacher, that marked the start of Mushroom.<

Against all odds, Mushroom had superb timing. The krautrock flavor of its first single, a 20-minute motorik piece called “The Reeperbahn” gained a good bit of underground popularity. “It was the time of Tortoise,” says Thomas. “People were rediscovering Neu!, and so by coincidence, we were the right band at the right time.” The band scored a break when German experimental/proto-industrial band Faust picked them as the opening act for a San Francisco date. Soon Mushroom was collaborating with Ayers and Gong guitarist Daevid Allen, opening for Porcupine Tree and generally flirting with the fringes of mainstream popularity.

“We were a prog band, but not really,” Thomas says. “We were an indie band, but not really. The jam band scene was going on, so we kind of attached to that. But we weren’t exactly a jam band.” He admits that being impossible to classify was both an asset and an obstacle. “We kind of fell in these cracks,” he says. “Sometimes the shit worked, and sometimes it didn’t.” 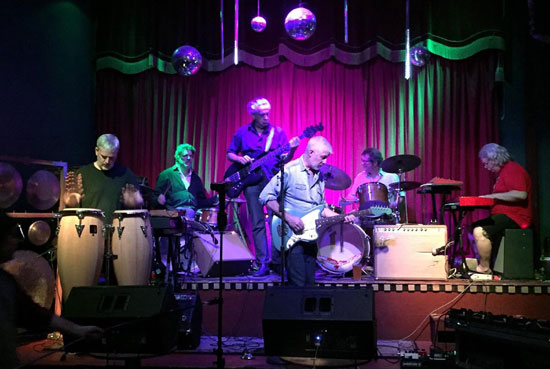 Mostly, it did. While Mushroom has never become a household name, through more than a dozen albums and EPs the collective has charted its own unique path. Sometimes difficult, often hypnotically alluring, Mushroom music is always unpredictable. And lack of planning is part of the plan. “Mushroom has never rehearsed,” Thomas says with pride. “There have been 400 Mushroom shows, and 375 of them have been pure improvisation. We set up a groove, and people like it,” he says, “even if they don’t own anything in their record collection that’s quite like us.”

Thomas allows that there is some planning involved in a Mushroom performance. “I curate the music by whom I invite to play,” he says. “If you came to see us, you might’ve seen three horn players, two keyboard players and no guitars.” Another show six months later could have been quite different, featuring two guitarists and no horn section. “That kind of keeps it fresh,” Thomas says.

Though Thomas is the force that keeps Mushroom moving forward, he considers himself anything but a virtuoso. “I’m extremely flattered that these guys will play with me,” he says. “This is my personal masterclass in musicianship from all these great people.” He thinks of himself more as a prime instigator, and cites early ‘70s loose aggregation Ginger Baker’s Air Force as an inspiration.

Speaking of plans, Mushroom’s original plan called for releasing Songs of Dissent – its title a “little fuck-you” to the outgoing Trump regime – in early 2020. But the pandemic put the project on ice. Yet Pat Thomas believes that the album’s rescheduled September 10 street date – and the homecoming gig at The Make Out Room on September 12 – feels perfectly timed. And experience tells him that adventurous concertgoers will find something to like. “We once did a jazz festival,” Thomas recalls with a chuckle. “And people were actually dancing!”