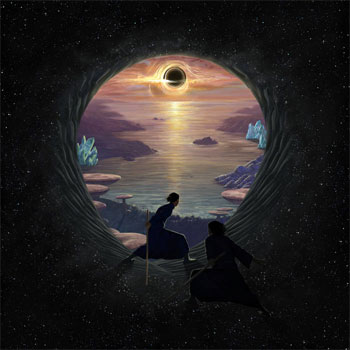 The third album from psych-pop outfit Sandy’s, Magic Mind has a shimmering, multilayered character that may evoke thoughts of Yoshimi Battles the Pink Robots-era Flaming Lips, early Crowded House and even Pet Sounds. Yet it sounds like none of those things; the third album from the Bay Area group is a fully-realized work that showcases the accumulated creative development of the band led by Alexi Glickman.

The group released its debut, Fourth Dementia, in 2014; in the ensuing years, Sandy’s hasn’t exactly churned out new records. Prom, a five-song EP, dropped in 2016. Then, save for a few scattered singles, fans of the band’s luxuriant dreamy pop soundscapes have had to wait more than three years for a full-length followup to 2018’s aptly-titled Chime.

Glickman won’t be rushed. “Every aspect of [the process], from writing to recording to overdubbing to mixing and even mastering, has to be inspired and magic,” he says. And that makes the creative endeavor a lengthy one. “You kind of have to wait for lightning to strike.”

You can’t fake that, Glickman insists — nor can you engineer inspiration into the project if it’s not there. Drawing from another creative discipline, Glickman provides an example to illustrate his point. “You know how some films are a technological marvel, but they’re not inspired? They don’t do the thing that E.T. does. By the time they take off on those bikes, you’re just weeping,” Glickman enthuses. “And you don’t know why.”

His point is that in the best pop music, there’s a kind of emotional manipulation at work. And — like the moviegoer who engages in suspension of belief so as to enter the filmmaker’s world — the attentive listener willingly surrenders to the emotional cues set forth in the artist’s music.

Glickman subscribes to that notion; it’s something he thinks about a great deal. And he appreciates the investment of time and attention that a listener would put into experiencing Magic Mind. “The album we’ve just made is not background music,” he says with a chuckle. “You don’t cook dinner to it. It’s more like, ‘Okay, I’m going to put on the headphones and experience this for half an hour; I’m going to trust Sandy’s with my emotions.’”

And Glickman believes that trust is well-placed. “I think we’ve earned the right to take you on that journey,” he says. “Because the process was really authentic. And that’s why I feel okay about putting it out into the world: because it feels true, it feels connected to humanity.”

Glickman makes a salient point about the characters that inhabit the songs on Magic Mind. “They were us,” he says. “There was no separation between what this album was about and the people who were in the band and our families. This was about mental health; this was about tragedy; this was about loss; this was about depression and mania and addiction.” He stops and laughs, then adds a rhetorical question: “Who the hell wants to spend any time with that?” 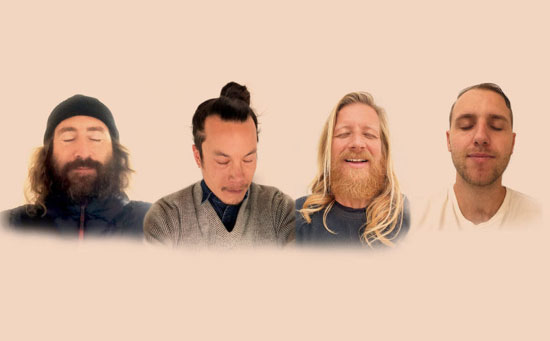 He hopes that the answer is something along the lines of “lots of people.” Even though Magic Mind isn’t strictly a concept album or one with an overt narrative thread, taken as a whole it does feel like that kind of a record. And that’s by intention. After a suite of pop tunes ranging from 24 seconds to conventional length, the album concludes with its epic title track, running more than eight minutes.

But the dreamy tune doesn’t waste the listener’s time. “Magic Mind” builds on the soaring, dreamy character of the songs that precede it, folding in Magical Mystery Tour-like textures, a bit of shoegaze, some space rock, and an overall feel that recalls Klaatu’s “Calling Occupants of Interplanetary Craft.” After fading to a whisper, the arrangement builds slowly, inexorably toward the Big Ending. It’s an exhilarating payoff.

For Glickman, beginnings and endings are really important. And in sequencing albums, he looks to DJs for inspiration. “I feel like DJs and people who make mixtapes are even better suited for that than actual musicians themselves,” he says. “It’s a skill that they fine-tune: ‘What’s the set list? What’s the order?’” Surprisingly, when settling upon the track order for Magic Mind, Glickman wasn’t completely sure that the album should close with the sprawling title cut. “It felt right,” he says. “And it felt like a movie. But I wasn’t 100 percent sure; there’s no denouement; things don’t get tied up neatly in a bow at the end.”

But the record seemed to know how it had to wrap up. “We didn’t have any extra tracks lying around to [add],” Glickman admits with another chuckle. “And so I was like, ‘Well, shit.’ Because at the end of all this, there’s this huge climax, and then there’s all this noise, and then you can kind of hear the buzz of the amps, and the pedal clicks off, and it’s just kind of…‘That’s it.’”

Glickman pauses a beat, reflecting on what he’s just described, and realizing that it sounds like the end of a film soundtrack. “Oh, shit,” he says, again. “I guess that’s my answer!”

On some of his other projects, Glickman says he would “get the band — really creative, awesome people you want to hang out with — and just jam. Then the record would become an editing project.” Those kinds of records can be made quickly. But a project like Magic Mind is a different matter, and Glickman knew it when work began on the album.

“I put on some of the rough mixes of some of the early songs, and I got this wave of foreboding,” he recalls. “I knew that it had the potential to be really deep and possibly the best one that we had ever done, but I just knew it was going to take a lot of work.” He admits to facing some existential dread at the prospect of making the third Sandy’s album. “Part of me knew that it needed more life to happen, to be put into the songs,” he says. “It’s like aging a wine or something: it just needs a little more time.”