This feature was the cover story of Mountain Xpress’s August 25, 2021 issue, previewing the LEAF Downtown Festival.

A defining feature of Asheville’s modern history is its festivals. From late July through September, the city has been host to a dazzling array of outdoor festivals celebrating music, arts and – most of all – community. Some, like Bele Chere, have come and gone. Yet many remain: Goombay, Shindig on the Green, the Greek Festival, the Big Crafty and the Hard Lox Festival, to name but a few. But in recent years, perhaps the grandest of all local cultural festivals has been LEAF Downtown. The 6th Annual LEAF Downtown Festival happens August 27 and 28.

Launched in 2015, LEAF Downtown built upon the successful foundation of the twice-annual LEAF Global Arts Festival in Lake Eden. LEAF Downtown expanded the nonprofit organization’s core mission of celebrating the tapestry of cultural traditions that enliven music and the arts. LEAF Downtown presents the key components of the bigger festival, but in a style and format that – by virtue of its location and free admission – embraces even more fully the community component. 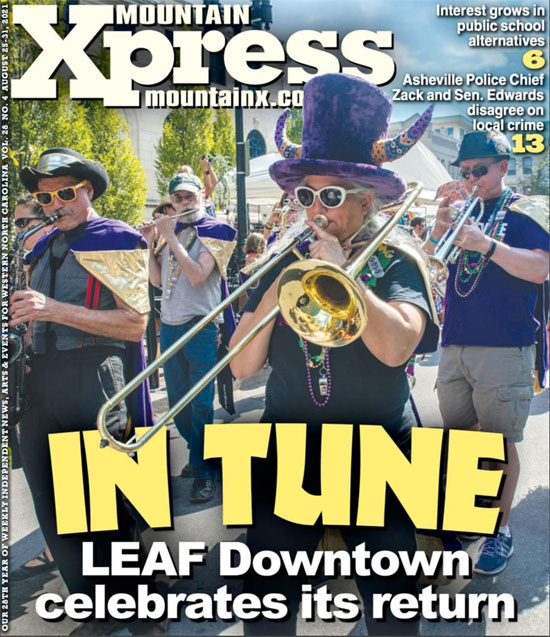 Like most all public events, LEAF Downtown skipped the 2020 season. But it’s back for 2021, and organizers have put together a program immersed in many musical styles. Scheduled performers for the two-day event include funk band Newcleus, Grandmaster Caz, and Secret Agency featuring Asheville’s own Cactus. The festival’s local focus is showcased by WNC artists including Billy Jonas, storyteller Roy Harris, Billy Jonas, Free Planet radio, West Sound, Kayla Lynn and others.

Every LEAF Downtown has a theme, and this year it’s “concrete love.” The event’s performing arts coordinator Otto Vazquez explains the phrase. “We come from our other festivals and retreats at Lake Eden’s natural settings, and now we’re bringing it back to the city of Asheville, to the concrete park. And after what we all experienced last year, we want to bring love – a sense of togetherness and community, love you can build on – back to Asheville.”

Even beyond the festival, LEAF has long displayed a commitment to bringing those qualities to Asheville. The pandemic forced the temporary closure of LEAF’s brick-and-mortar museum and storefront mere days after they opened in spring 2020. Vazquez says that both survived thanks to “a lot of strategic planning.” He says that LEAF executive director Jennifer Pickering “made some really smart decisions to prolong the life of the organization. We’re still being cautious, but we’re thriving again.”

That caution makes sense, as the pandemic isn’t over. Vazquez expresses his belief that mask wearing is becoming the “new norm, and I’m cool with it.” He’s also cool with those who aren’t cool with it, emphasizing that because LEAF Downtown is an outdoor event, social distancing is possible. “We want people to feel safe, have a good time, and continue to enjoy live music,” he says. “They can continue to enjoy their lives, regardless of what we’re dealing with.”

Acclaimed Asheville storyteller Elder Roy Harris will preside over the festival’s opening ceremony, and his Story Time event on Friday afternoon will be a highlight of the festival. At LEAF Downtown and in his role as a board member of the Black Storytellers Association, Harris says that his goal is “to open storytelling up to the next generation.” His credo emphasizes the universal character of storytelling and the oral tradition: “My story is your story, your story is their story, and their story is our story,” he says. “We’re going in a circle.”

Performing with her band The Change, singer, songwriter and electric bassist Kayla Lynn will be featured as part of Saturday’s entertainment lineup. She’ll also play a set with her mom, Melissa McKinney, and with festival openers King Garfield & Funkin’ Around. Lynn has been involved with LEAF since 2016, when she was still in high school. “I was invited to play the festival, and I never left,” she quips. Today she’s a LEAF resident teaching artist. “I hope people come to LEAF Downtown and get exposed to new music, art and ideas,” she says. “I hope it opens their minds and hearts to other people and other cultures.”

Asheville had its period of turmoil last year,” Vazquez acknowledges. And he sees LEAF Downtown as part of the way forward. “Music, dance and entertainment have a healing aspect,” he says. “That’s what this event – and all our events – are going to do. They’re going to heal the community, put people back into a state of mind that says, ‘We’re going to get through this. We’re going to have fun, and we’re going to be safe.’”