Some bands make a career out of writing and recording the same album over and over. Close your eyes and there’s little difference between the albums made by classic rockers Boston in the ‘70s and the ones they put out decades later. For all their appeal, there’s not a world of difference between Oasis’ 1994 debut Definitely Maybe and their 2008 release Dig Out Your Soul. In those cases and others, that’s a feature, not a bug. There’s a sizable segment of the listening public that – consciously or not – subscribes to the adage, “That was good; do it again.”

Other artists chart a different path. Though they may have some stylistic signatures that unite their work – a distinctive and recognizable lead vocalist, for example – they follow their muse wherever it leads, with comparatively little thought or attention given to commercial considerations. Consciously or not, they adopt an attitude of, “We’ve done that. Now let’s do something completely different.” 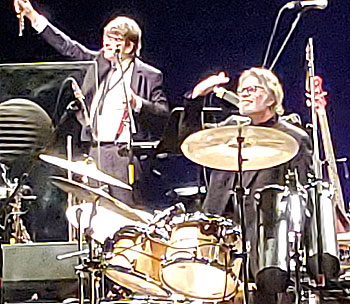 Among the most notable musical acts in the latter category is King Crimson. Founded in the very late ‘60s by guitarist Robert Fripp, the original King Crimson was at the forefront of progressive rock. Combining a classical music sensibility with bone-crushing riffs and dramatic soundscapes, tracks like “21st Century Schizoid Man” signaled that the London-based group wasn’t interested in following trends.

And it didn’t. But the first-album lineup of band – featuring future Emerson Lake & Palmer bassist/singer Greg Lake as well as future Foreigner multi-instrumentalist Ian McDonald – fell apart within months. Fripp soldiered on, making In the Wake of Poseidon with temporary members. For perhaps the only time in its career, King Crimson made an album that sounded like its predecessor.

Yet for its five subsequent ‘70s-era releases, King Crimson navigated wild, jarring shifts in both its lineup and musical style. The music took a jazzier turn on Lizard (1970) and 1971’s Islands. Those two albums featured Mel Collins on saxophones, flute and bass flute. He’d be gone by the following release, but Collins would return to the King Crimson lineup in 2013, after a 40-year break. “I’m a much better player now,” he says with a warm chuckle.

By the time of the mighty Red in 1974, the group was a trio: Fripp, bassist John Wetton (later of Asia) and drummer Bill Bruford. The latter had quit Yes in 1972 because that progressive rock band didn’t present enough of a challenge; he’d find that challenge in great quantity with the demanding, knotty proto-progressive metal of tracks like “Fallen Angel” and “Starless.”

The boundary-pushing Red looked to be King Crimson’s breakthrough album, one that reached a wide mainstream audience while remaining steadfastly uncompromising in its musical values. But the ever-idiosyncratic Fripp had other ideas: he announced the group’s dissolution two weeks before the record’s release. It looked as if the era of King Crimson was over.

It was, and it wasn’t. After spending time as an in-demand journeyman guitarist collaborating with some of the more innovative artists of the era (David Bowie, Peter Gabriel, Brian Eno), by 1981 Robert Fripp was ready to return to King Crimson. But the reactivated band was even more different than it had been before: while Bruford returned, the other two members – guitarist Adrian Belew and Chapman stick wizard Tony Levin – were Americans. And the ‘80s King Crimson made progressive, polyrhythmic music that (in part) shared some of the musical concepts with which Talking Heads had toyed, taking them in radically different directions. That lineup would go on to do something no previous configuration of King Crimson had done: it made three albums.

Then King Crimson went away, again. This time it stayed away for nearly a decade. And when King Crimson returned in 1994, it didn’t resemble previous incarnations: the band was a “double trio” featuring two guitarists, two drummers and two stick players. The music was even less commercially-inclined than ever before, combining metal, prog, modern classical and industrial in a singular manner that only vaguely resembled the few other artists exploring similar territory (Tool, Nine Inch Nails).

With the by-now-expected lineup and configuration changes, hiatuses and stylistic shifts, King Crimson has more or less persisted since then. The group released its most recent studio record, The Power to Believe, in 2003. The band members have remained busy collectively and together, though for the last several years King Crimson has functioned primarily as a live entity. Asked if a studio album is likely to figure in King Crimson’s future, drummer Pat Mastelotto is forthright. “’Probably no’ is the quick answer,” he says. “I don’t see us going into a studio.” He does make the point that the band “carr[ies] a studio with us at every show; everything’s being recorded.” But for now, live music is King Crimson’s raison d’être.

The current lineup is known colloquially as “the seven-headed beast,” and slightly more formally as King Crimson IX. With the exception of the departure of drummer Bill Rieflin in 2019 (he passed away in 2020), the group’s lineup has remained essentially the same for more than eight years (an eternity in Crim-land). Joining founder Fripp are guitarist-vocalist Jakko Jakszyk, longtime member Tony Levin (bass, Chapman stick) and sax/flute man Mel Collins, who was a member way back in 1970-’72.

And this King Crimson has not one, not two, but three drummers: Mastelotto (involved with all of the group’s activities since 1994), former Porcupine Tree drummer Gavin Harrison and Jeremy Stacey (the latter also plays keyboards). In concert, the three drummers are set up out front at stage level, with the rest of the band behind them on risers. As with most everything involving King Crimson, things are done differently, and not simply for difference’s sake.

That do-it-differently approach applies to the music, as well. Even though there has been little in the way of new compositions from King Crimson over the last two decades, the live arrangements of songs from its deep back catalog are often strikingly different than the recorded versions. Taking full advantage of the group’s stunningly high level of musicianship – and those three powerhouse drummers – the seven-headed beast King Crimson executes its music with what might be called brutal finesse.