Climbing That Tree: The Story of She Trinity (Part 2 of 5) 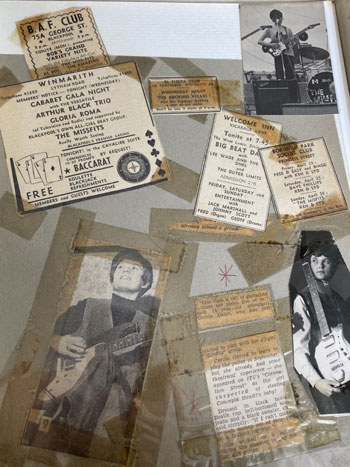 “We always used to wear mens’ Beatle boots, bell-bottom jeans, black turtlenecks with a great big ‘M’ in plaid in the middle, waistcoats and Beatle hats,” Carola Daish recalls. “That was our normal outfit, because – at first – we didn’t want to draw attention to ourselves, that we were girls. You know: ‘Who wants a bunch of girls? We don’t want the girls; we want the boys!’”

But by the time of the Winter Gardens show, the group had decided to display a more feminine look. “We had these dresses made out of lace,” Daish says with a chuckle. “Today you’d think it was somebody’s curtain! But they were nice. They were fitted and they were long. And we wore Tom Jones shoes with the buckle.”

Those dresses were custom-made by Pauline Moran and her sister Kathleen. “Four are in burgundy lace,” says Moran, who still has a piece of the fabric. There wasn’t enough of the burgundy fabric for all five Missfits, so Janet Baily had a pale blue dress instead, “with a slit up the back so she could sit astride her drums.” The Missfits sometimes appeared dressed in miniskirts as well. 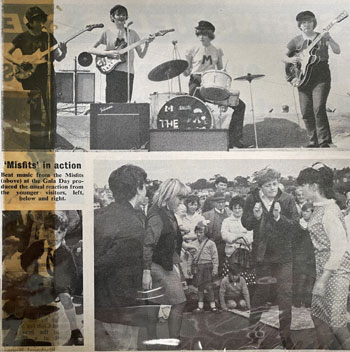 The group’s repertoire steered clear of light pop fare. “Pauline was the one who liked to research,” Daish says. “She was very focused. Of all of us, she was the most serious-minded. She’d come to the group and say, ‘Okay, this is what we’re going to try.’” The songs Moran brought to the group were primarily American rhythm and blues. “So we never played traditional Beatles stuff,” says Daish. “The music was unusual for a lot of the music halls around the North early on, but it caught on.”

By 1964 The Missfits were booking gigs in large ballrooms throughout Lancashire. “At one event, we won some competition in Preston, and then we went down to Decca,” Daish says. “That was my first trip to London.” A June recording session at Decca yielded two songs. “The one that we focused on, that we liked, was [Bo Diddley’s] ‘Can’t Judge a Book By Its Cover,’” Daish says. Each band member received a tape copy of the finished recordings, but today all have gone missing. That session didn’t lead to a recording contract, but Moran says that “nonetheless it got us a good deal of publicity.”

Still, Daish says that her parents weren’t sure if they liked her being in a band; her role in The Missfits competed with her schooling. Still only 15, Daish was approaching her GEC’s, and her father was becoming less supportive of her playing in a group. “You know,” says Daish wistfully, “you hear about drinking and drugs and all that, but there was never, ever, any of that in The Missfits. Everyone in that group was so focused. It was just the era of playing guitars and pumping out good music.” But even though she loved playing, Daish left the group and turned her attention to her studies. 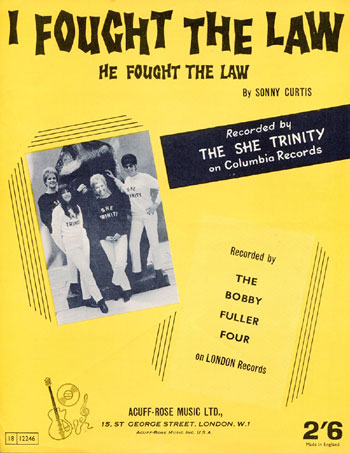 Pauline Moran says that at that time, she was studying acting under “a private teacher, the great Elizabeth Watson. I always knew that I wanted to go to the Royal Academy of Dramatic Art to train as an actress.” Her idea was that she would earn money as a rock musician, and use those funds to pay for RADA. She would indeed eventually get into RADA, but first, that rock career beckoned. So Moran answered the Melody Maker advert.

With Moran joining Yorke, Gillespie and Kirby, the group entered the recording studio with Mickie Most. She Trinity’s first recording was a cover of a Sonny Curtis hit, re-titled “He Fought the Law.” The flip of the 1966 Columbia single was a group-penned instrumental, “The Union Station Blues.” 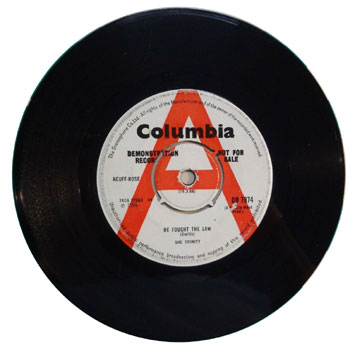 “He Fought the Law” single

But Mickie Most and Peter Grant seemed busy with other things, Gillespie says. “They had Donovan and other people who were coming up and doing quite well.” She believes that She Trinity was not that interesting to them. “They thought we might be a gimmick,” she says. “So they never really put their backs into it somehow.”

Yorke doesn’t have many positive memories of Mickie Most, either. “He was very much a male chauvinist,” she says, recalling a typical interaction. “He called me up and said, ‘Come in, I’ve got your B-side for your record.’” Yorke showed up on a Saturday, to be told the group was schedule to record the following morning. “So we had that evening to learn the song,” she says.

On Sunday morning, Yorke, Kirby, Moran and Gillespie laid down one take of an instrumental track. “After we finished it, Mickie Most came in and he said, ‘What’s that?’ I said, ‘We just put a track down.’” The engineer played the tape back. “Mickie said, ‘Okay, that’s a wrap.’” Released in 1966 with a songwriting credit to vocalist Sue Kirby, “Wild Flower” was released as the b-side of She Trinity’s second single, a cover of Lou Christie’s “Have I Sinned.”

For her part, Moran enjoyed working with producer Most. “He was great,” she says. “I think he found us very unusual. And I remember he was kind.” She adds that Peter Grant – not widely known as a kind sort himself – fiercely championed the group. “We were in Peter’s office one day,” she recalls. “He picked the phone up and someone answered on the other end, and he said, ‘Here, one of your bands is bad-mouthing one of my bands, She Trinity, saying they can’t play their own instruments. Well, any more of that, and the shit will hit the fan and will be flying all over you!’ And he slammed the phone down. That’s classic Peter Grant.” 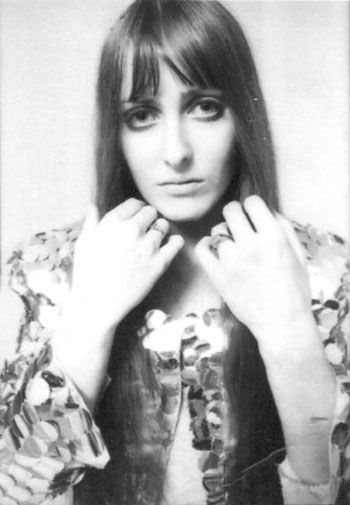 The band did get to play on its own recordings … or on the b-sides, at least. “We played our own instruments,” Yorke emphasizes. Though for one of the sessions – she doesn’t recall which – a keyboard part was needed. “So John Paul Jones played piano,” she says. She Trinity eventually added a fifth member, Liverpool keyboardist Marion “Rusty” Hill. Gillespie says that Hill had a great sense of humor. “She once introduced herself as Womanfred Womann!”

Sue Kirby was dismissed from She Trinity early on. “She was actually kicked out,” Shelley Gillespie says. “She was very young and very immature, and … enough was enough.”

The “Wild Flower” recording would be released again as a b-side. This time the a-side was a novelty tune with the unwieldy title, “The Man Who Took the Valise Off the Floor of Grand Central Station at Noon.” Moran laughs ruefully at mention of the song. “We had to do as we were told,” she says. “You hardly ever got to choose the material. I mean, please. Blame Mickie Most for that one!”

She Trinity’s live repertoire featured a lot of cover material. At various points, the group’s set included Dionne Warwick’s “The Love of a Boy,” Cilla Black’s “You’re My World” and a few Beatles covers, Gillespie recalls. “We did the Stones’ ‘Satisfaction’ as well,” she says with a mischievous chuckle. “Which was a bit frowned upon.”