Widespread Panic: The Best-of That Never Was, Part Two

Ain’t Life Grand
By September 1994, Widespread Panic had completed their fourth studio album, Ain’t Life Grand. For this album, the band returned to their Athens roots, once again working with producer John Keane. Initial sessions were approached as rehearsals, but band and producer were impressed with the recordings of those sessions, and thus Ain’t Life Grand was born.

A pair of Ain’t Life Grand tracks is included here. The album’s country-flavored title track features John Keane stepping out from behind the recording desk to play some lovely pedal steel guitar. “Fishwater” is a showcase for the assured percussion work of Domingo S. Ortiz.

Widespread Panic’s back-to-basics approach worked: not only did Ain’t Life Grand place on the charts (#85, Billboard 200), but a single from the album, “Can’t Get High” (not included here) reached #34 on Billboard‘s Mainstream Rock Tracks chart in 1995. 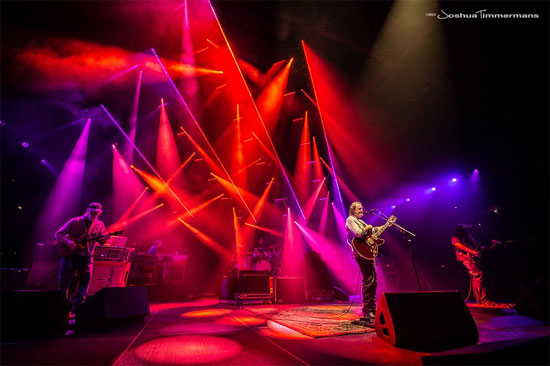 Hempilation: Freedom is NORML
Speaking of getting high, in November 1995 Widepsread Panic contributed a tune to a benefit album, Hempilation: Freedom is NORML. In support of marijuana legalization, the disc also featured marijuana-themed songs by The Black Crowes, Blues Traveler, Gov’t Mule and other acts associated with the then-popular traveling H.O.R.D.E. (Horizons of Rock Developing Everywhere) Festival concert circuit, and with, well, smoking pot. A reading of Van Morrison’s Moondance track, Widespread Panic’s “And it Stoned Me” transposes the tune and dials back the gospel feel of Morrison’s original in favor of an Americana-flavored midtempo arrangement. Hempilation: Freedom is NORML sold in excess of 110,000 units, raising more than $90,000 for the nonprofit organization.

Bombs & Butterflies
Nearly two and a half years would pass between the release of Ain’t Life Grand and its full-length studio follow-up, Bombs & Butterflies. Released in February 1997, the album once again featured production by the band’s longtime associate John Keane in his Athens studio. Three tracks from the album are featured on The Definitive Collection.

“Hope in a Hopeless World” was first recorded by Roebuck “Pops” Stapes, patriarch of The Staple Singers, on his 1994 solo gospel/blues outing, Father Father. “Aunt Avis” features a guest vocal by its composer, Athens folk singer/songwriter Vic Chesnutt. Though he had been releasing albums of his own since 1990, Chesnutt rose to prominence thanks in part to a 1996 tribute to him, Sweet Relief II: The Gravity of the Situation. That album raised funds to help Chesnutt, who had become paralyzed in a 1983 auto accident. The funk underpinning of “Rebirtha” supports on of the band’s strongest melodies; though it’s not prominent in the mix, John Hermann’s sonorous piano work is a key to the track’s appeal.

Bombs & Butterflies would be the most commercially successful album of Widespread Panic’s Capricorn era, reaching #50 on the Billboard 200 album chart. “Hope in a Hopeless World” hit #13 on the Mainstream Rock Tracks singles chart, and a Billy Bob Thornton-produced music video for “Aunt Avis” helped increase the band’s exposure and boost album sales.

Light Fuse Get Away
Because Widespread Panic had built their reputation upon live performance at least as much – if not more – than on studio recordings, it made sense that they would eventually release a proper live album. Released in April 1998, Light Fuse Get Away was just such an album, a compilation made from selected soundboard recordings from the band’s 1997 tour. The track featured here is “Pickin’ Up the Pieces,” recorded in Boston and featuring guest musician Branford Marsalis on saxophone. Light Fuse Get Away reached #67 on the Billboard 200 chart.

Panic in the Streets
To promote Light Fuse Get Away, Widespread Panic scheduled a “release party” concert in Athens. That performance drew an estimated 100,000 fans, and was documented on DVD and CD releases, both titled Panic in the Streets. The CD release included three tracks now featured on this collection.

The concert opener “Disco” isn’t a mirror-ball dance tune; it’s an instrumental showcase for the myriad talents of John “JoJo” Hermann on piano and clavinet. From there, the band seamlessly segues into the soulful “Tall Boy.” Late in the set, WSP reach back a decade to the title track from their debut album “Space Wrangler,” giving it a delightfully extended reading.

The Definitive Collection features three cuts from ‘Til the Medicine Takes. “Climb to Safety” features some aggressive guitar riffs and John Hermann’s gurgling, heavily distorted Hammond organ. “All Time Low” employs a more intimate, up-close production aesthetic than the approach generally favored by the band. The guitar workout of “Surprise Valley” is breezy and vaguely psychedelic all at once.

With their Capricorn contract completed, Widespread Panic launched their own label, Widespread Records. Working as independent artists, WSP would continue to work with John Keane, co-producing many of their albums with him. To date they have released six studio albums on Widespread, plus a staggering array of live sets: nine new live albums, nine “vintage” recordings of shows dating back as far as 1989, and twenty entries in their Porch Songs series of concert soundboard recordings. By the time you read this, there may well be more. ©2016, Bill Kopp