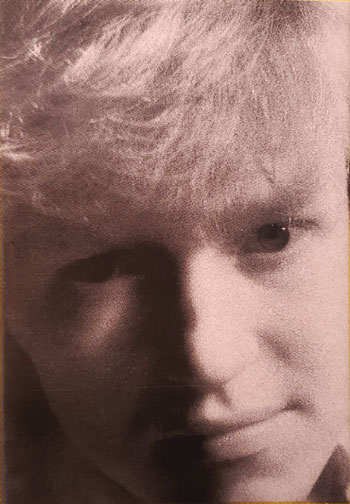 A detail from the back cover of elemen opee elpee, this is a rare photo of Stephen Fievet.

We’ve talked about the whole band concept. But with MIDI technology and everything, do you have any interest at all in doing solo gigs?

Well, if I had a means of doing it, possibly. When I was doing all these new songs, I made an additional track without the lead vocals so that I could do that live if I needed to. But the problem I would have is trying to book things and then get there and deal with it all by myself. To do it and come off well, and I don’t know if it would with me being so tiny and invisible. But I might do some live versions on a video or something.

What was the gestation period for the new album?

It was about 10-11 months but, when I say that, for 10-11 months, that’s pretty much all I was doing. Most of my time was spent doing that. There’s one song in particular – “Living Tide” – that I keep waiting for somebody to pounce on me and say that I ripped off another song.

When I listen to your stuff, I don’t think of it as being derivative of anything else.

That’s nice of you to say that. So far, with this one, the comparisons are so far all over the map. You wouldn’t believe it.

It’s people’s points of reference; it has to do with what they’ve heard. It’s like, “Oh, it sounds like Slowdive,” or “It sounds like Glenn Branca.”’

“Things” from the new album, whatNOP.

Both! With the current one, I would pull out some of these song snippets I was talking about, little pieces and fragments, some of them I would pull from things like that. Other ones, something would hit me while I was in the middle of one song, and I would start writing another one, and it would be all brand new. So, it’s really just whatever happens. I try to catch is inspiration rather than just a melody or something, where something feels like it has substance to it. Sometimes it does, and sometimes it doesn’t. 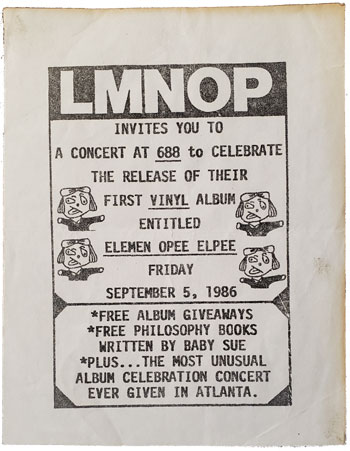 I’m having the most reaction to the first song on the album; you brought up “Things.” And that one is a really weird one to me because, when I was writing it, I wasn’t thinking about what it was about but, after I finished it, I thought, “Well, now you could really interpret the ‘things’ as being people, or you could think of ‘things’ as being things, either one.” That one did not write itself easily. It started off as some other word or phrase and, for some reason, it transformed into that, but it was three different songs that sort of got twisted altogether and, somehow, that came out. But, that wasn’t easy! Believe it or not, that song was one of the harder ones to put in a frame and make work.

It does work, and it’s a good lead-off. It’s a good introduction into the record, I think.

Well, thanks! I was wondering if people would hate it, because it sounded too much like a hair band or arena rock or something.

Do you still have that Flying V that you played at the Moonshadow?

Oh, I do have it. I’ll tell you though, I’m really rough on guitars, and I’ve played that guitar so hard. I still have it, but it’s all torn up. It’s a mess!

You can get it via bandcamp, too, but the very ‘90s-looking basic HTML of the original LMNOP site is somehow more appropriate. The site also lets you order pretty much anything else LMNOP has ever done; there are even some vinyl records (no cassettes, though).