Thrilled with my new discovery, I raced to my desktop, opened my email app and dashed off a quick note to said publicist. I feverishly typed words to the effect of, “Hey, I’m sure Stephen doesn’t do interviews, but if by some miracle he does, let me know.” I received a prompt reply, informing me that sure, he’d be willing to chat. Color me surprised. And pleased.

Even more surprising (the surprises, do they never cease?), Stephen was willing – I think he even suggested it – to do a Zoom interview. Y’know, like, video chat. I will admit that caught me off guard; my sense that he’s a very private person in real life has persisted these many years.

On the appointed day and at the agreed-upon time, I launched my Zoom app. And there he was. Well, sort of. I never came right out and asked him to confirm my suspicion, but I am pretty sure what I was actually seeing was my interview subject hidden behind big, dark sunglasses and a shaggy, longhaired wig. Now, I could be wrong about this, and it’s worth pointing out that save for what looked like a hastily-assembled disguise, Stephen Fievet was a candid, funny, witty and engaging interviewee. Normal, really, and that’s not meant as an epithet.

We talked about a lot of stuff. Here’s an edited transcript.

Bill Kopp: When I first heard “Things” on the new whatNOP, my first thought was that other than a much higher fidelity, it would’ve sounded right at home on any of the early LMNOP cassettes.

Stephen Fievet: Oh, really? Wow! That’s really interesting to hear! I haven’t gotten a lot of reactions from anybody in person, so I’m kind of at a loss.

I bought those cassettes 36 years ago. Was there a defining concept that you had for LMNOP from the beginning, or did it develop over time?

It kind of developed over time, Bill. When I was just starting out, I was trying to emulate the one-man bands that I worshipped or idolized at the time. Probably the #1 would be Roy Wood. I really, really loved Roy Wood’s solo [albums]. Then, it did evolve over time in that I kind of was trying to figure out what I was striving for. I finally figured out that – when i was learning how to play – the two bands that I liked playing and singing along with the most were the Ramones and Shoes. I was trying to come up with a sound that was the cross between those two except with different lyrics, because I always thought I wanted the lyrics to be something different. A lot of it just sort of fell into place over time, because I didn’t really know then – and I still really don’t know, really – exactly what I’m doing. 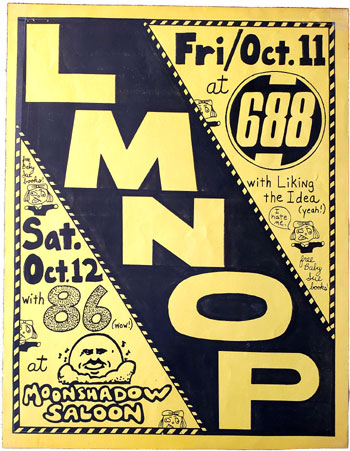 You’re the first who’s ever said they were influenced at all by Shoes. Have you read their biography?

No, I haven’t! I didn’t know they had a biography out.

You know what? Apparently, this box set that’s out, that’s all their Elektra material, apparently it sounds like that is being received a lot better overseas than they ever were here. So, I think they’ve probably got a bigger audience there.

You’ll probably appreciate this: In the mid- to late ‘90s I went on a trip with a friend, just a weekend thing, because they had a business trip to Washington D.C. I got there, and it turned out that Shoes just happened to be playing at a little club that Saturday night. I got to go and see them and talk with them!

From the beginning, when I started buying those cassettes, I was struck by the way in which you seemed to – whether it was effortlessly or not – to combine dark things and sort of dada humor with what I can only call pop values: catchy, hooky, pop songs. Can you point to something or someone that inspired you in that particular direction?

I don’t really have a specific thing that comes to mind there, except the person who probably affected me the most as far as coming up with words for songs was Marc Bolan. When I was so into him as a kid – and I still am – he was writing more based on the sound of the words than the meaning. So I kind of picked up on that, and I thought, “Well, that’s a lot better way of doing it than trying to just make sense all the time.” He wrote a lot of words that just sounded good. I always was really impressed with that, and I have tried to do the same, I guess.

Is there a general location or source that your lyrical ideas come from?

I’m not making this up, Bill. I’ve talked to a few people before who I think they thought I was giving them some kind of a line, but it’s really the truth. When I’m coming up with stuff, I go into some kind of a trance, and stuff just comes out really fast, and I have to catch it on tape or write it down really fast. Only after it’s finished can I try to evaluate what happened, because a lot of the time I really don’t know what’s going on. So, that’s why, in a lot of cases, if somebody asks what something’s about, I don’t really know. 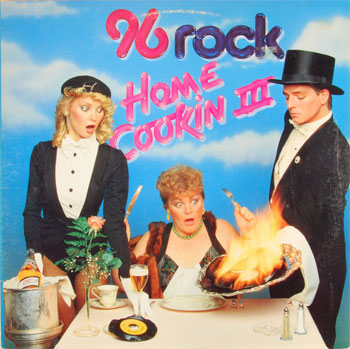 So, the lyrics for songs tend to come to you fully formed? You don’t sit there and say, “What should the next line be?”

Well, it’s both! Some things write themselves instantly without editing. Then, other ones will be reworked and changed and altered 20 times. I would say I like the A part better where it just writes itself, but some of the ones that turn out better end up being the B type. Over time I think I’ve gotten better at determining when I’ve come up with something that’s really terrible, because then I know to throw it out. Whereas, a long time ago, I couldn’t tell the difference!