The following feature appeared as the cover story in the August 2021 issue of Bold Life magazine.

When a musical personality debuts on one of television’s popular competition programs — America’s Got Talent, American Idol, The Voice — there’s sometimes a sense that they were “nowhere” until the moment they first stepped into the spotlight. Of course that’s not true; many have spent years honing their craft, developing their skills before earning their onscreen opportunity. The hard work that has gone into their performance can be obscured, making them seem like the proverbial overnight success. But there’s often more than meets the eye.

That’s especially true in the case of Avery Roberson. The Rutherfordton, N.C. country singer, guitarist and songwriter first came to national prominence early in 2021 as a contestant on the 20th season of NBC’s The Voice. Roberson debuted on March 2, singing Tim McGraw’s “If You’re Reading This.” He was the unanimous pick of all four judges; that honor earned him the chance to return for the “battle” round of the competition. His cover of James Otto’s “Just Got Started Lovin’ You” earned the vote of judge Kelsea Ballerini, keeping him in the competition. Roberson’s third performance was in the “knockout” round, singing Chris Young’s “Tomorrow.” There he was beaten by eventual runner-up Kenzie Wheeler. 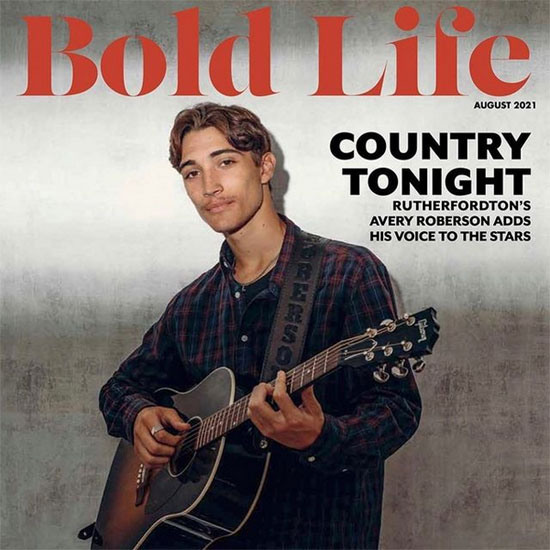 But millions saw and heard the 21-year-old North Carolinian; ratings for each of the three episodes on which Roberson appeared surpassed 6 million viewers. And in a sense, what they witnessed was merely one moment on the musical path Roberson has been following most of his life. “I very first started getting into music from listening to my dad and his three cousins play gospel, bluegrass and country when I was very young,” he says. Those family musical gatherings inspired Avery to start writing his own songs.

At that point, he didn’t yet play an instrument. When he turned five, Avery’s dad bought him a guitar. “I kind of messed around with it,” he says with a self-effacing chuckle. But by his teenage years, Roberson got serious and learned to play guitar properly. “I learned on my own,” he says, “to be able to play the guitar and sing with it.” Other than the bits of coaching he received while a contestant on The Voice, he’s completely self-taught as a musician and vocalist.

Avery’s tastes run toward modern country, so that’s the direction he pursued with his own music. And with greater skills came confidence; he auditioned—unsuccessfully—for The Voice in 2018. “They told me to get more experience,” he says. A run at American Idol yielded the same response. At that point, Roberson decided to lay off the auditions, focusing instead on sharpening his craft and working on his songwriting.

But Avery’s mom didn’t give up. She encouraged him to take part in a virtual (video) audition for The Voice. He resisted. “I just want to do my own thing: original music,” he told her.
His mom wouldn’t take no for an answer. “One day,” Avery recalls, “she came up to me and said, ‘You’ve got three days to prepare yourself before you audition online for The Voice.’” He relented, did the audition, and was invited to fly to Los Angeles for a final audition. And he made it. “Really,” Roberson says with a good-natured shrug, “I’ve got to thank my mom for that. I guess it’s just a mom thing.”

Roberson enjoyed his time on the program, and is appreciative of the fact that it has led to additional opportunities closer to home. In late June, he traveled to Nevada, where he performed at a rodeo in front of a crowd of several hundred. “Out of every show I’ve played,” he says, “that was the most people.”

That personal-best record is soon to be shattered. Avery Roberson is a featured artist at the Night in the Country outdoor concert festival in Tryon, N.C. There he’s part of a lineup that includes stars like Miranda Lambert, Heath Sanders, Big & Rich and one of Roberson’s musical heroes, Chris Young. Backed by a full band, Roberson plans a set that will spotlight his talents as a songwriter. “I’m going to do as many original songs as possible,” he says, promising that his single, “Ringtone” will definitely be in the set.

But along with being a singer, songwriter and musician, the Rutherfordton native is a fan, too. And that explains one of the things he’s most looking forward to at the Night in the Country. “I’d just love to go talk to Chris Young,” he says. “I’d like to shake his hand and tell him, ‘It’s a pleasure being able to sing your song on the show.’”