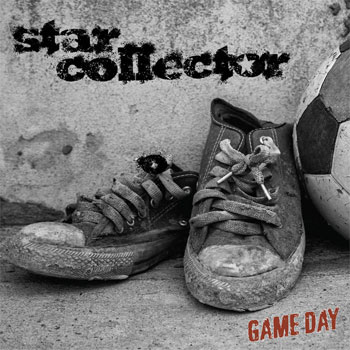 Devotees of rock and pop will know that “Star Collector” is a classic Monkees tune from their high-watermark 1967 album Pisces, Aquarius, Capricorn & Jones Ltd. It’s also the name of a superb melodic rock quartet from Vancouver, British Columbia. Influenced by – but not aping the sound of – revered bands like The Who and The Jam, Star Collector makes song that pack a wallop and remain in the listener’s head long after the fadeout.

The band has been making music for quite awhile; Star Collector’s debut, Demo Model 256 was released in 1999. Other albums followed: Black Eyed Soul came out in 2001, followed by Flash-Arrows & the Money Shot in 2003 and Hundred-Bullet-Proof in 2006. An extended quiet period followed, with the band’s fifth long player, Game Day finally appearing in 2021.

The hiatus (or whatever it was) did nothing to tamp down the energy of the group. Guitarist, lead singer, producer and primary songwriter Vic Wayne’s muse is as strong as ever. Wayne knows how ot craft a chiming melody and place it into a high-energy musical context; “Stranger (Renting Space in My Head)” is a case in point.

Wayne handles the lead vocals, but the band’s three other musicians (lead guitarist Steve Monteith, bassist Adam East and drummer Adrian Buckley) all provide harmony and backing vocals. On tunes like “The Silent Type,” those bgvox conjure the mental image of Monteith and/or East leaning over to harmonize into a mic; such is the classic (a word used in its best sense) character of the band. Extended “ahhh” vocals on the tune’s outro contrast (yet blend) nicely with Monteith’s power-chording.

As a lyricist, Wayne has the demonstrated ability to use familiar phrases in a way that avoids cliché; he engages in wordplay with songs like “Hook, Line & Singer” without ever veering into too-clever-by-half self-consciousness. Listeners who appreciate music that walks the tightrope of power and finesse (see also: Smithereens, Grip Weeds) will appreciate the finely-tuned songs on Game Day.