Album Review: Wanderlust — All a View 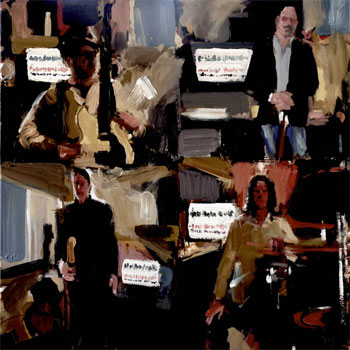 Roch Parisen’s review of Wanderlust’s 1995 debut name-checks some useful touchpoints to place the Nashville band’s music in context: The Searchers, Beau Brummels, Brds and Bay City Rollers. For music lovers of a particular perspective, that’s enough to gain their attention. And though I myself never heard Prize at the time, it’s apparently held in high esteem by those who did.

A pair of LPs for acclaimed power pop label Not Lame followed, but large-scale success did not. Even an opening slot on a tour with The Who didn’t catapult them into the big leagues (see also: Willie Nile). The band certainly had the goods, with great musicianship, razor-sharp hooks and memorable tunes. But faced with the usual obstacles — record company problems, internal dissension – Wanderlust broke up.

Fast forward to present day. Main songwriter Scott Sax recently stumbled across an old DAT – remember those? – containing demos of songs written shortly after the release of Prize, a time which (it’s now clear) the band was still firing on all cylinders.

So he did what one does in fairytale stories: he put the old band back together. Today Ron Bonfiglio is known as a solo artist and sometime Brian Wilson musical associate; he returned along with drummer Jim Cavanaugh and bassist Mark Getten to record new parts on top of those demo recordings. But this is no ghostly “Free as a Bird.” Instead the result is All a View, a superb collection of songs that don’t scream “1990s” any more than, say, Material Issue or Jellyfish. (Yeah, my turn to drop some names for context.)

In places, All a View approaches the ambitious progressive pop of Jellyfish; “2 Million Pieces” is one such song. “Corduroy Moon” may remind some listeners of The Grays. Bonfiglio’s “Trick of the Light” (not a John Entwistle/Who cover) makes this listener think of Michael Penn or Matthew Sweet.

“Critical Mind” has echoes of The Motors’ “That What John Said” and/or John Lennon’s “(Just Like) Starting Over.” The gentle “Bored and Blue” moves in a pleasing country-rock direction that – thank goodness – feels more like Poco than Eagles. “Inspiration” is a chiming heartland rock-pop tune of the first order; it may conjure thoughts of Gin Blossoms. “Something Happens” feels like London Town-era Wings. The opening/title track has the grandeur and majesty of an epic album-closer. And “Black Currant Jam” is a snaky, minor-key rocker with faint echoes of Warners era Badfinger. All in all, All a View is an excellent album, timeless and timely all at once, and recommended.

If there’s a criticism of All a View, it’s the packaging. The cover art – very, very reminiscent of The Grays’ Ro Sham Bo, as it happens – is lovely enough, but the rest of it looks and feels like the apartment wall of an obsessed homicide detective (or serial killer), and – as a result of that – kudos to anyone who can figure out the track listing without putting the CD in a computer. (Yes, the track list is included, but you can easily overlook it.) Regardless, don’t let that discourage you from checking out this fine album. Let’s hope that Sax and his band mates stay together and give us more of a similar quality.

All a View is shortlisted for consideration in my end-of year Best Albums roundup.