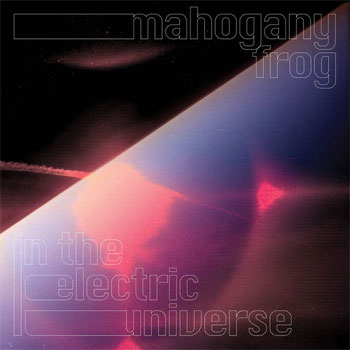 These days, much of what sees release through Leonardo Pavkovic’s venerable MoonJune label tends toward jazz/fusion. That’s great, as the label brings some of the best those styles have to offer to a wider audience. But it’s nice to find the occasional progressive rock entry, something that – while ambitious – appeals to a slightly wider potential listener base.

That’s very much the case with In the Electric Universe, the seventh(!) album from Canadian neo-prog/psych outfit Mahogany Frog. The instrumental group combines classic textures (such as electric guitars with their signal run through a Leslie speaker) with more modern sounds (like brown-note bass bombs a la Flaming Lips). The result is music that’s hypnotic, engaging and catchy without being “poppy.”

Those who enjoy epic-length compositions that take the listener on a sonic journey will delight in tunes like “Theme From P.D.” and the nearly eighteen-minute “(((Sundog”))).” Mahogany Frog isn’t exactly what our friends at Progarchives would define as orchestral prog, but that kind of nuanced, deeply layered sensibility does very much inform the group’s approach.

The group makes something of an effort to lean in an unconventional direction, with keening sounds that clash up against one another. But there’s an underlying groove – alternatingly pulsing, throbbing, stomping – that keeps things rooted in an accessible musicality.

Mahogany Frog makes use of song titles that recall early King Crimson: a handy example is “Octavio (Including: The Ascension of the Moonrise Children).” But the classical/jazz feel that informed early Crimson doesn’t figure prominently into the band’s sound. Instead, there’s an engaging reliance on synthesizer textures, with comparatively minimal use of guitars, drums and the like. That said, In the Electric Universe’s tonality is so rich and varied that it doesn’t exactly sound like a “keyboards” album.

Ultimately, how the sounds are created on this album is of less importance than the manner in which they are used. And thye are used in an impressive way, one that should appeal to devotees of prog, trance, space rock and other accessible-yet-exploratory musics.