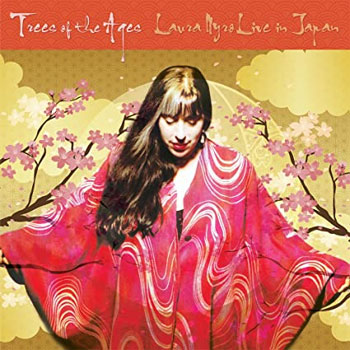 Laura Nyro was a talent of staggering dimensions. Not only was the New York singer-songwriter possessed of a preternatural ability to write enduing melodies – many of which were hits for other artists – but she was a powerful presence on her own recordings. The controversial and notorious alleged-disaster of a performance at Monterey Pop notwithstanding, she could, in fact, deliver the goods live onstage. That fact finds is expression and proof in Omnivore’s new reissue, Trees of the Ages: Laura Nyro Live in Japan. Compiled from three 1994 concerts in Tokyo and Osaka, the recordings showcase an artists seemingly at the height of her powers. Seated at her piano, she glides effortlessly from song to song, displaying her virtues with only the sparest of vocal accompaniment.

Her reading of “Ooh Baby Baby” underscores just how much her approach influenced Todd Rundgren, whose own recording of the song in the 1970s owes a great deal to her style. And when, mid-set, she breaks into her most well-known numbers (“And When I Die,” “Save the Country,” “Wedding Bell Blues”), her unadorned versions highlight both the lyrics and the lyrical quality of her melodies. And even the famously reserved Japanese audience can’t help but clap along on “Wedding Bell Blues.” (You might, too.) This live recording is technically a reissue, having been released in 2003 under a different title in Japan only. But this loving repackage – featuring a thoughtful essay by John Kruth – brings this rarity to Western ears.