Album Review: The Beat Farmers — Tales of the New West 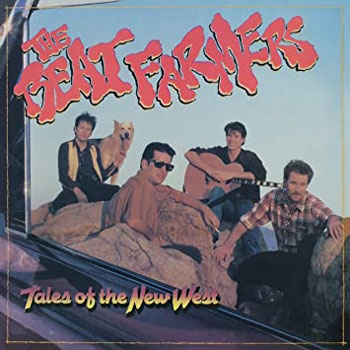 One of the more fascinating characteristics of ‘80s new wave / college rock / alternative (or whatever you’d care to call it) was the manner in which it folded in genres of music that had previously been considered outside the scope of pop music. Or at least outside the scope for the population who listened to it. Of course The Stray Cats are among the most obvious example: their ‘50s rock and roll revival style caught people off guard, but it somehow fit into the new music of the era.

Jazz got some love, even. British groups like The Style Council and Prefab Sprout explored jazzy textures in their music, and scored hits. And back here in the USA, country music influences found their way into hard-charging rock’n’roll. Bands like Green on Red, The Long Ryders and Jason and the Scorchers applied a twangy, heartland musical vision to songs that had all the fire and vitality (and hooks and melody) of the new music.

Another great group that played countrified music that appealed to new music listeners was the Beat Farmers. Appearing on the scene in 1983, the band featuring the outsized personality of drummer Country Dick Montana was an exemplar of the nexus at which country and rock could meet.

The wrote catchy songs, which helped immeasurably. So while a cover of The Velvet Underground’s “There she Goes” showed that the tune could be rocked-up and twangified at the same time, it was the band’s original material that best showcased its virtues.

The Beat Farmers blasted out of the gate with their 1985 debut LP, Tales of the New West. A near-perfect record, it was also one that the group would never again equal on subsequent studio outings. As is so often the case with exciting bands, there was something ineffable about The Beat Farmers’ live shows that recording studios couldn’t easily capture or communicate.

The band made few concessions to current trends. On a spectrum that has, say, Johnny Cash on one end and Thompson Twins on the other, “California Kid” and “Happy Boy” peg the needle to the former. And the skilled production duo of Steve Berlin (Los Lobos) and Mark Linnett completely avoids any of the sonic trappings that would make so much of the ‘80s music sound dated (yeah, Phil Collins: I’m lookin’ at you, again).

Typical of the album, the band’s cover of John Stewart’s “Never Goin’ Back” is pure twang (with a punky outro), and it rocks hard. Strong melodies, lovely harmonies and an attitude that’s serious yet lighthearted add up to a record that is stuffed full of musical joys. IF there’s a shortcoming to the album, it’s that it blows by in a real hurry.

Happily, Blixa Sounds’ new expanded reissue of Tales of the New West features a second disc, a recording of the band onstage in 1983. Recorded almost two years before the band’s studio debut, the live set captures a band on fire. The Beat Farmers year through a 21-song set that features only five or so tunes that would appear on its debut.

That second disc has been released before, in 2003 as Live at the Spring Valley Inn, 1983. But if you can find a copy, expect to pay $75 or more. This handy 2CD set brings the fiery live set back into the realm of attainability, and pairs it with the studio album you’ve simply gotta have. Dan Perloff’s liner note essay is the icing on the cake. Essential.