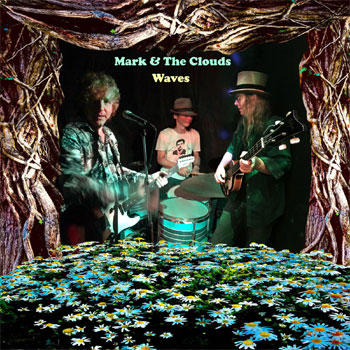 Many artists have chosen the retro path. They write new, original tunes but aim for a sound and style that evokes the past. And like any other creative set of decisions, this approach can yield results that are successful, or not. When mining the musical aesthetics of the past, it’s far too easy to fall into cliché, or simply to get it wrong.

But when it’s right, it’s a joy to behold. In the ‘90s, band like Kula Shaker and – let’s admit it – Oasis cherry-picked some of the winning-est sounds of the past and dressed them up in then-current framework. And while Oasis was a little(!) derivative, the songs held up, and helped ot define a musical era.

It’s fair to wonder if Mark and the Clouds could achieve similar success. As showcased on Waves, their music is built around Marco Magnani’s sharp songwriting, and the sonic trappings of the band’s songs evoke everything from ‘90s Britpop (“You & Me in Space”) to Mind Games-era Lennon (“Back in Time”) to late-Sixties freakbeat (“You Wanna Put Me Down”). And that’s only the first three tracks.

Magnani’s vocals are perfectly suited to the kind of music he and his band make. With a musical approach that feels a bit like a UK answer to New Jersey’s fabled Grip Weeds, Mark & the Clouds are a trio to be reckoned with. The classic/throwback approach is empty if it’s not applied to solid songwriting, but this group has that covered. Not a note is wasted; the songs are exemplars of economical writing and arrangement.

Even when the arrangements swing for the fences – check “Winter Song” – there’s still muscle at the core of the melody. And while the group itself is a three-piece, they enlist auxiliary players when the songs call for a bit more. A handy example is the brass layered onto the swoonworthy “All These Plans.” The song would be very good even without it, but those splashes of horns take the tune somewhere else … somewhere you’re advised to go.

The waltzing “Free Me Now” is built around acoustic guitar, but it features some thunderous reverb and pedal steel guitar that – once again – take a good song and make it something really special. And the band shows its ability to lay down a riff rocker with songs like “No One Makes a Sound.”

The album is staggering in its consistency; thanks to songs like “The Same Old Dream” – eight tracks in and possibly the best song on the set – Waves sounds more like a greatest-hits LP than a statement of here’s where-we-are-today record.

The record’s title track sounds like Simon and Garfunkel crossed with very early Badfinger. The shimmering Merseybeat flavor of “Promised Land” feels as authentic as anything else on the album; John O’Sullivan’s pedal steel, the string arrangement and the brass instrumental break are all deft dollops of icing on the tasty cake. The delightfully noisy “Miles and Miles Away” is a fully-charged rocker. And the album concludes in fine fashion with an atmospheric, spaghetti-western feel on “Somebody Else.”

I must hold out the possibility that something else might see release in the last five months of 2021 that could change my opinion, but at this moment, there’s no better album from this year than Mark & the Clouds’ Waves.