Tim Bluhm concedes that the Mother Hips fan base isn’t as large as the following of some other groups, but he believes that their followers’ loyalty more than makes up for their numbers. “They’re very dedicated to what we do,” he says. But that doesn’t mean that they accept everything uncritically. “We get feedback from them about what they like,” he says, “and what they don’t like. They’re very vocal.” And that feedback isn’t ignored. Bluhm says that fan reaction influences the Mother Hips’ musical direction “probably more than we realize.”

Yet it’s not as if the band is conducting focus groups to figure out what creative avenues to pursue on each successive album. The reality is more subtle and nuanced. Greg Loaicono says that in part, the Mother Hips sometimes use their live performances as a testing ground for new ideas. “Especially early on when we were on the road so much, our sound checks were rehearsals for new material,” he explains. “Then, we’d play a lot of those new songs live, before we’d record them.” By the time the band arrived at a studio session, the nature of the songs had been influenced by the crowds’ reaction to them. 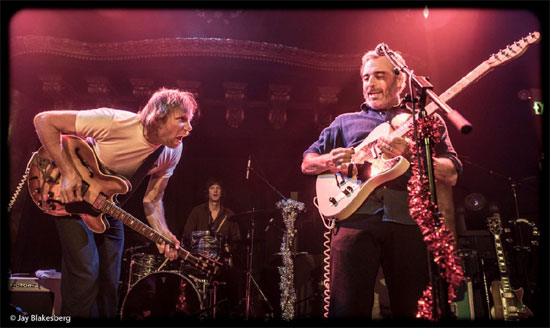 “There are songs that we started playing live,” Loaicono says, “and we’d realize, ‘Oh, well: the way that started wasn’t great. We need to figure out a better intro.’ The crowd gave us in-time feedback.”

“You can tell right away when the crowd isn’t into something that they’re hearing,” Bluhm says. That kind of real-time quality control is something that the Mother Hips take seriously. And because of live performance being sidelined for a year and counting, “we don’t really have that any more, right now,” Bluhm says. “Nobody does.”

Touring the country for years affected the kind of music that the Mother Hips would go on to make. So, too, did a move in the ‘90s from Chico to the vibrant cultural hub of San Francisco. But relocating to the big city didn’t change things that much. “The road was really our home,” Loiacono says. “When we’d come home to San Francisco, it was only for maybe a week or two at a time. Since we started touring, we were just ‘in the machine.’”

Bluhm agrees. “We were traveling so much,” he says, “and we were at that age where the whole concept of living somewhere and having a home had no significance; it didn’t really matter.” He says that most of the factors that influence the kind of music he writes came to him early. “Some strong threads keep showing up, and I think that they come from the music that we worshiped when we were forming our musical identities.” He chuckles as he makes an admission: “I still try to copy the same songs that I was trying to copy when I was 20 years old!”

But San Francisco did widen the band’s perspective. “We’ve never been a super social band,” Loiacono admits. “But we met a lot of people there. We made some really good musical friends. It felt like we were part of something larger than our little Chico bubble.”

Very early on, the band caught the attention of producer and label head Rick Rubin; he signed the Mother Hips to his American Recordings label, which would release 1995’s Part-timer Goes Full and Shootout from 1996. “That was definitely the first – and arguably the most important – push we ever had in our careers,” Bluhm says.

With the benefit of hindsight, Bluhm says that he and his band mates “didn’t even realize how big of a deal it was. We didn’t have the perspective,” he explains. “We just started a band, made a record, and got signed to a major label. We were just like, ‘Oh, cool! That was easy.’ We didn’t have an idea of how rare or valuable that opportunity was.” American Recordings gave the Mother Hips significant tour support. “They also gave us some pretty healthy recording budgets to make those two records,” Bluhm says. “We reached a lot of people. That’s really what took us out of our little regional bubble.”

Another turning point followed on the heels of the American Recordings deal. The Mother Hips were added to the H.O.R.D.E. tour lineup, bringing their music to an even wider audience. The band would take part in two H.O.R.D.E. tours in 1994 and ‘95. Loiacono and Bluhm recall being thrilled to be on the same bill with the Black Crowes, Sheryl Crow, Wilco and Blues Traveler.