Thirty Years with the Mother Hips (Part One)

Some artists have made a successful career out of establishing a signature sound and then sticking with it over the course of their entire catalog. Other artists take a potentially riskier approach, following their muse wherever it takes them. The latter description certainly fits Northern California group the Mother Hips: across ten studio albums, the group has recorded and released music that can be variously described as alternative rock, jam, folk rock, psychedelic, Americana and even power pop. And along the way the Mother Hips have built and cultivated a loyal fan base.

Last year marked the 30th anniversary of the band’s formation in Chico, California. In the absence of a tour – the COVID-19 pandemic made that impossible – the band has instead launched a reissue campaign: beginning in February 2021, the Mother Hips’ entire catalog is being reissued, one title per month. And for the first time, the band’s album are being pressed onto vinyl. 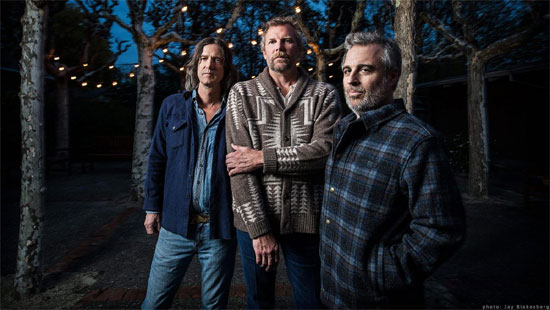 Guitarist, vocalist and songwriter Tim Bluhm addresses the point about the Mother Hips’ ongoing stylistic metamorphosis. “Some bands have had a lot of success making the same records over and over again,” he observes, “once the label and the band have found an equation that is successful.” He chuckles when he explains that the Mother Hips “definitely found some equations that were successful, but none of them were commercially successful.”

And perhaps counter-intuitively, that lack of major commercial success brought with it a kind of creative freedom. “I think that [commercially] successful bands can get pigeonholed,” Bluhm says, “because it makes money for everybody. And that’s understandable.” The Mother Hips exercised the latitude that their comparatively under-the-radar status provided.

Having explained some of the motivation for changing things up from album to album, Bluhm good-naturedly goes on to refute the basic point. “We’ve always pretty much just played whatever was in our heads,” he says, “but I personally don’t think [our style] has varied all that much through the years.”

The fact is, when the Mother Hips recorded their debut album, 1992’s Back to the Grotto, most of the members ere barely out of their teenage years. “We probably didn’t think we were ‘just kids,’” Bluhm says with a laugh. “But we didn’t know anything about making records, or really even about being in bands, other than just watching famous bands and admiring them from afar.” In Chico – which at the time had a population of around 45,000 persons – the band was disconnected from the larger musical world. “We really didn’t have a lot of people around us who had more experience than we did,” Bluhm says. “So we were just making a record that was extremely isolated, and unique because of that.”

But despite – of perhaps in part because of – the band members’ tender years and relative isolation, songs like “Hey Emilie,” the opening track on that debut LP, have worn well, with a breezy, easygoing character that showcases the band’s assets. Inspired playing, an arrangement that builds from gentle folkiness to swaggering arena rock, and tight vocal harmonies are hallmarks of the tune. And those fundamental musical qualities would characterize the majority of the Mother Hips’ subsequent work.

Greg Loiacono founded the band with Bluhm; the lineup would change over time, and today they’re the only founding members still in the group. Loiacono doesn’t look back at the Mother Hips’ body of work as the product of any sort of plan, much less a grand design. “I can remember going into each record – or at least quite a few of them – thinking, ‘We should do this kind of thing,’ or, ‘This one’s going to really rock,’” he says. But as the writing and recording got underway, the music sometimes seemed to have ideas of its own.

“Inevitably,” Loiacono observes, “it just morphs into whatever is happening, whatever is coming out of us in the moment.” He laughs when he predicts that the Mother Hips will probably never make a concept album. Each record, he says, “takes on its own life. We don’t know what it’s going to end up being.”