Rory Jagdeo’s musical journey has taken him from his native Guyana to Canada and Belize, from New York City to Houston and finally to Western North Carolina. Though he had always been immersed in music, work occupied much of his time; it wasn’t until landing in Texas that he began to pursue his musical muse in earnest.

“It all began when I was volunteering for the Houston Blues Society around 2008,” says Jagdeo. “I started to write lyrics, and melody [was] in my head all the time.” Expressing his musical ideas through his voice, guitar and harmonica, he recorded and released an album, Hanging On.

At the center of that album – recorded with a full band backing him – is Jagdeo’s shimmering acoustic guitar and soulful harmonica work. The songs are generally upbeat, but with a grounded sense of someone who has experienced life’s up and downs. By 2010, Jagdeo had released a follow-up, Cling and You Die.

Cling and You Die expands Jagdeo’s musical worldview, with hints of everything from country and western (“Lost Without You”) to the searing hard rock of “Angel in the Wind.” But it wasn’t until 2012 that Jagdeo began performing in public. “It all started with open mics,” he says, explaining that those informal appearances allowed him to build the confidence he’d need to mount proper performances. 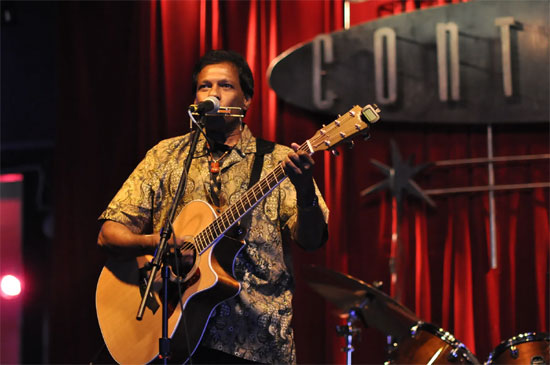 And that happened soon enough. By 2016 he had moved to Chapel Hill, N.C. and completed a third album, Coming Home. That album finds Jagdeo widening his musical scope even further, to include original songs exploring reggae (“Love is Very Strange Thing”) and returning to his blues roots (“14th Street”).

In the college town Jagdeo says he “was able to play in some really cool places like a coffee house and a few restaurants.” But it was after his next move – to Boone – that Jagdeo felt he had truly found his niche. In addition to performances at farmers’ markets, he started performing in the street.

“I found that busking was my greatest strength,” he says. “I love playing in front of complete strangers, just being out there and jamming out.” He says that to date he has played more than 40 gigs. “And at some of those gigs,” he adds, “I’ve played for three hours.”

Jagdeo’s live repertoire is based on songs from his three albums and assorted singles, and is peppered with well-chosen covers of songs by other artists. He mentions that the latter category includes tunes from Bob Dylan, Neil Young and The Bee Gees. “I do a Bob Marley segment as well,” he says, noting that all of the songs feature his harmonica playing.

In 2020 Jagdeo relocated to Asheville. But because of the pandemic, he didn’t schedule any public performances for the whole of the year. That’s changing now. But even though his well-arranged and -produced albums feature a full band, solo performance is his chosen approach for live appearances.

Playing solo, he says, means “I never have to worry about timing, I don’t have to worry where I am in the song, and I have total freedom to take this song wherever I want. I can go slow, I can go fast, I can linger with a solo with my harmonica.”

But, Jagdeo reveals, he actually does work with a band of sorts. Cockeyed Jumbees is one of his latest projects. With a good-natured laugh, he describes it as a “ghost” band. “I get very good musicians to play on these songs,” he says, “but nobody knows who the musicians are!” He explains the origin of the odd band name. In the tropics of Guyana, “Jumbees are spiritual entities,” he says. “In the United States you have these movies about them, but you call them zombies.”

Sadly, Jagdeo’s brother passed away in April 2020, leaving behind unrealized plans to write a series of books. Inspired by his late brother, Rory has taken up that mantle. “I locked myself away from May to September, and I wrote Walkabout: Searching for the Epic Life: A Guyanese Memoir,” he says. The book recounts Jagdeo’s twenty years in Guyana; that country’s political, economical and social characteristics; and the story of his musical journey from South America to North Carolina.

As proud as he is of the book, Jagdeo’s primary focus is squarely upon making music. “Now that people are getting back into the swing of things,” he says, “I’m looking forward to playing on a weekly basis.”