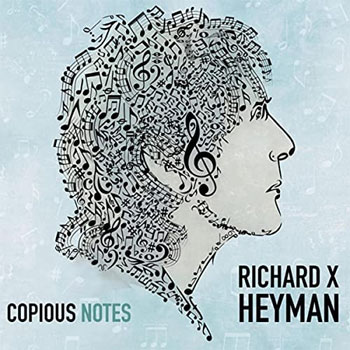 Richard X Heyman started making great solo records right out of the gate. Anyone who enjoys highly melodic rock with sterling pop values, hooks galore and just the right amount of oomph simply must own his first several albums. And they’d do well to purchase everything else he’s done, as the man displays impressive quality control.

He’s essentially a one-man band, putting him in that rarefied category alongside McCartney, Rundgren, Wonder and a select few others. There’s a kind of signature sound upon which Heyman can be relied upon to deliver. And on Copious Notes, he delivers that vibe in wonderful fashion. The creamy vocal harmonies of “Nearly There” open the album, and Nancy Leigh’s vocal harmonies are deftly mixed in to make those heavenly choirs even better. The jangle one expects from RXH is present, and the song’s overall vibe makes it sound like gentle rock played in a church. (And that’s meant in the very best possible way.)

Sure, Heyman front-loads his albums like one’s supposed to, but the quality remains consistent. His consummate skills on a multiplicity of instruments – far beyond workmanlike – shines on every single track. The degree of care that went into making the album is obvious throughout.

Heyman’s a master of balladry. He knows his way around a pop tune. And his arrangement skills are superb. He does nearly everything himself, and when he brings in guests, they add something extra-special, too. Few artists can claim a consistency to compare with that of Richard X Heyman. He’s never made a weak album (or EP, for that matter) and it doesn’t look as if he’s going to start now. 34 years after his debut EP, Copious Notes is another winner.