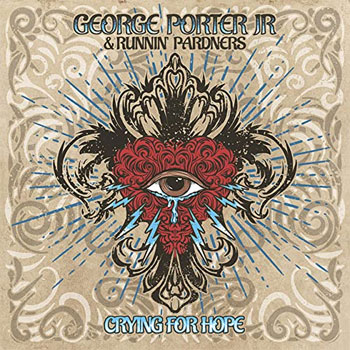 Calling someone music royalty sets the bar impossibly high. But there are times when it’s unavoidable. There’s really no other way to accurately describe George Porter Jr. His bass guitar and vocals are inextricably entwined with the work and reputation of New Orleans funk heroes The Meters. Since 1990 Porter has led another group, Runnin’ Pardners. Across nearly a dozen albums, the group bridges The Meters’ sound with something even a bit more expansive.

Tasty grooves, strong melodies and some deep, deep funk are the key ingredients in Crying for Hope. The instrumental “Porter 13A” is a representative track, with every instrument offering something memorable. The analog synth lines splashed across the tune add appeal to an already irresistible cut.

“The Ladder” is as laid-back as “Porter 13A” is spirited. Subtle dialogue between Michael H. Lemmler’s Rhodes and Chris Adkins’ lean, spare lead guitar lines form the core of the track, but the rock-solid, assured and understated rhythm section of Porter and drummer Terrence T. Houston holds it all together. Not until the song’s second half do the massed vocals come in, chanting a phrase several times until it becomes an hypnotic mantra.

The album is divided into three “sides,” and each has its own character, subtly different from the others. Side B’s highlight is the soulful workout “Cloud Funk,” with keyboard and guitar work so sparkling you’ll look over your shoulder to check if the players are in your home. Everyone involved is on fire, but Lemmler seems the busiest, layering two and sometimes three keyboard parts onto each tune. Yet the overall feel is always perfectly in balance, never overstuffed, never overplayed. And at the center of it all, there’s always Porter, laying down slabs of thunder on cuts like “Wanna Get Funky,” a number far more imaginative than its title.

Side C opens with “Just Start Groovin’,” a tune that will take you back to the late-late ‘70s in the best possible way. “Taste of the Truth” is among the most rifftastic cuts on Crying for Hope; it’s also one of the best on a consistently strong record.

Plenty of artists are past their prime by their 70s, but they still have plenty to give in live performance, cranking out their classics. Porter didn’t get that memo: his work in 2021 is as enduring as anything in his back catalog. Crying for Hope is a triumph.