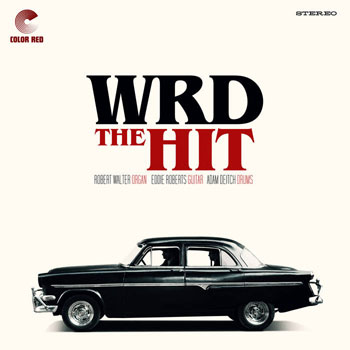 Far more often than not, the term supergroup is hype. Even when it isn’t use of the word can create unfairly high expectations. The members of Blind Faith understood that, and named their (short lived) group thusly. But in the world of jazz, a different sensibility took hold long ago. Artists receive co-billing, and get together in one-off, ad hoc or otherwise temporary, informal aggregations to do their thing. And in that context, the hype is less present, and the focus can instead stay where it belongs: on the music.

WRD is organist Robert Walter, guitarist Eddie Roberts and Adam Deitch on drums. Roberts, you may well know, is the guitarist in The New Mastersounds; he’s also the prime mover behind the new vinyl label Color Red. Walter is a found of Greyboy Allstars, and Deitch has played with Lettuce, Average White Band and other tasty outfits.

With that bit of introduction, you’re likely hip to a general idea of what The Hit sounds like. It’s an organ trio with Walter doing the bass pedals thing on his B3. In the grand tradition of in-the-moment jazz sensibility, the albums is the product of a pair of single-day sessions, one in 2018 and another in 2019.

If you wandered into the grooviest nightclub with an instrofunkjazzboogaloo band blowing, it would sound like The Hit. Joined on two tracks (“Chum City” and “Hot Honey”) by tenor saxophonist Nick Gerlach, the band sizzles with an interplay that’s soulful, natural, spirited and – most importantly – tuneful. They’re having fun and pushing the limits of what they can do, but they’re also keeping one foot planted firmly in accessibility. That makes The Hit live up to its name in spirit if not in chart action.

Help it along on the latter count by picking up a copy, won’t you? You shall not be disappointed. (And yeah, WRD’s a supergroup.)