Screen Classic ‘The Goddess’ Gets a Min Xiao-Fen Score 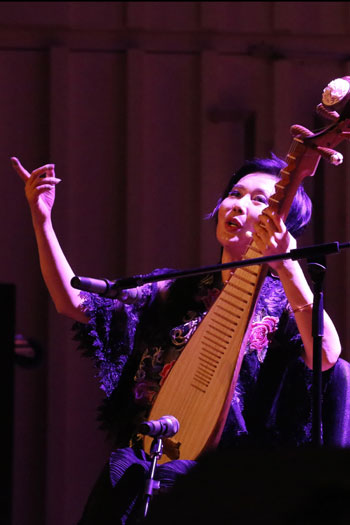 In 1934, writer-director Wu Yonggang’s silent film Shénnǚ (The Goddess) was released in China. Critically praised and popular among audiences, it was and remains an exemplar of China’s cinematic golden age. Exploring and building upon the beauty of the film, Asheville-based musician-composer Min Xiao-Fen has released White Lotus, an original score for The Goddess.

Years after its release, Wu Yonggang’s film was effectively written out of Chinese history. Subsequent generations would barely know of its existence, much less find any opportunity to see the film: Mao Zedong’s Cultural Revolution did not look favorably upon a film with a prostitute as its lead character. So Min Xiao-Fen grew up completely unaware of The Goddess.

Min grew up in China; from 1980 to ‘92 she was a soloist with the Nanjing National Music Orchestra. Her primary instrument is the pipa, a plucked, four-stringed traditional Chinese instrument dating back to the Han Dynasty (202 BCE). Min says that she wasn’t exposed to popular films or music until the 1980s. Prior to that time, “everything was about the Cultural Revolution,” she says. Her life as a touring musician was tightly controlled; minders kept close tabs on the orchestra’s musicians, lest one of them attempt to defect while visiting another country.

Even the concept of popular love songs was alien to Min until then. And a film like The Goddess would have been completely taboo. “Even now,” says Min, who emigrated to the United States in 1992, “you don’t see it officially in China. [The government] feels it’s a little bit too pornographic.” The plot of The Goddess is straightforward and tragic: to financially support herself and her child, an unnamed woman works by night as a streetwalker. A gangster claims her as his property. The gangster steals the money the woman has saved; she confronts him, and in the struggle, she kills him. She is sentenced to prison.

After Min Xiao-Fen settled in the U.S., she made a point of expanding her knowledge and understanding of popular culture. In addition to working with artists across multiple disciplines and genres – including Chen Yi, Carl Stone, John Zorn and Björk – she discovered the work of Buck Clayton. A jazz trumpeter with Count Basie’s Orchestra, Clayton was responsible for introducing Kansas City swing to 1930s Shanghai.

And it was her exploration of that era that led to Min Xiao-Fen’s belated discovery of The Goddess. Her previous albums have forged connections between seemingly different aesthetics: Min’s 2017 album, Mao, Monk and Me celebrated the 100th birthday of Thelonious Monk by interpreting the American jazz legend’s works using traditional Chinese instrumentation.

Against that backdrop, Min’s sixth solo album White Lotus seems a natural step. Accompanied by Palestinian American guitarist – and 2021 Guggenheim Fellow – Rez Abbasi, Min plays pipa, guqin (a stringed bass instrument) and ruan (a Chinese banjo-like instrument), with occasional vocals. She explains that while she composed the suite of songs as a modern-day accompaniment to the silent film, the album versions of the 12 pieces are designed to stand on their own. 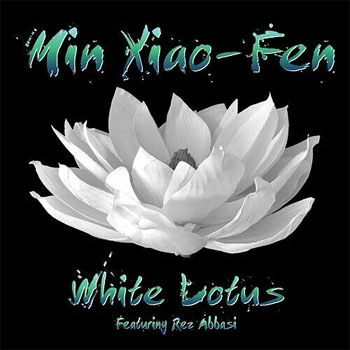 But there’s something extra-special about experiencing the original compositions in the context of a screening of The Goddess. And that’s what is planned for select upcoming performances. The duo will play live as the film is projected on a large screen. That approach affords some dynamics that wouldn’t have made sense on an audio-only CD.

“With a film,” Min explains, “you can’t play whole pieces.” Some scenes are very short; others are longer. She mentions a key scene in The Goddess, one featuring the unnamed protagonist and the gangster. “She grabs a bottle. And the moment she hits the guy’s head, I decided: silence. Just let the action speak.” Several seconds go by. When the man falls to the ground, dead, the music starts again. “You can’t do that on an album, right?” Min says with a laugh.

Min Xiao-Fen and Abbasi first premiered the new score for The Goddess in February 2018 at Roulette, an alternative performance space in Min’s then-home of New York City. Min says that while she composed the pieces for the score, she left Abbasi to improvise his contributions. “I don’t need to control him,” she says. “When he solos, I want him to do what he wants to do.”

Min moved to Asheville last summer. And with pandemic-related restrictions being lifted, she’s beginning the process of scheduling long-postponed concert tour dates. At the same time, she finds herself inspired by her new hometown. “Right now, I’m focusing on White Lotus and The Goddess,” she says “But the other day I was joking, ‘Maybe [for] my next project, I’ll play with birds, because they’re always singing here. It’s so beautiful.”

Note: a significantly truncated, heavily edited version of this featured appeared previously in Mountain Xpress. This is the full feature.