Steve Cropper: The Go-Getter Gets Going (Part One) 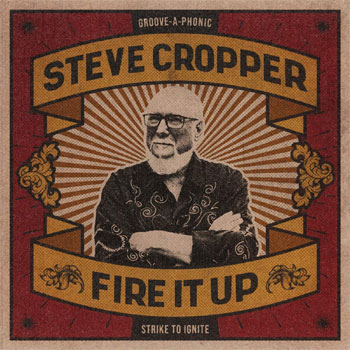 Ask serious music fans to name a tasteful guitarist, and inevitably Steve Cropper’s name is going to come up. As a studio musician, Cropper’s work is part of the center of gravity of innumerable recordings that came out of Memphis’ Stax Records in the 1960s. With Booker T & the M.G.’s, Cropper was responsible for some of the era’s most enduring instrumental music, from 1962’s “Green Onions” to the quartet’s immortal Beatles tribute McLemore Avenue to many other singles and albums. Now in 2021, he returns with what he likes to think of as his “second” solo album, Fire It Up.

More often than not, Steve Cropper has applied his talents to collaborative works: his co-writes with Otis Redding, Eddie Floyd and others helped gain those artists the fame they richly deserved. His songwriting prowess and memorable guitar licks put Memphis at the forefront of soul and pop. And the unassuming guitarist has long been a key part of the Blues Brothers Band, bringing classic sounds to audiences across the globe.

Less well known, though, are the clutch of albums Cropper has made under his own name. Although he was a well-established artist by the very early ‘60s – and a household name among musicians – Cropper didn’t step out for a solo turn until 1969’s With a Little Help From My Friends, an album on Volt (Stax’s “sister” label). That well-received set of reinterpretations of popular songs he helped create was joined that same year by Jammed Together, a guitar slinger’s triple-headliner extravaganza featuring Cropper alongside label mates Albert King (bringing the blues) and Roebuck “Pops” Staples (delivering the gospel-flavored textures).

But once the 70s began, fans of Cropper’s lean, economical yet indelible guitar work would have to satisfy themselves primarily with hearing him on other people’s records. As a session musician and producer, Cropper remained busy as ever, working with a dizzying array of big names including Ringo Starr, Levon Helm, Rod Stewart, Elton John Band drummer Nigel Olsson, Richie Havens, Delaney and Bonnie Bramlett, Leon Russell, Peter Frampton, Art Garfunkel, Paul Simon, Jimmy Buffett, Harry Nilsson, Neil Sedaka, John Lennon and many others.

Cropper got into acting – most often portraying a stylized version of himself – in the 1980s comedy The Blues Brothers. That gig led to the popular live touring band of the same name. And in the wake of the movie’s success, Cropper finally made a pair of solo albums, 1981’s Playin’ My Thang and Night After Night (1982). But when those albums are mentioned these days, Cropper tends to play down their importance.

“I’ve had other albums out for different reasons,” he says, going on to explain how those early ‘80s records came about. “There was a guy – a friend of mine – who really thought I could sing,” he says with a laugh. (Then and now, Cropper is known for his guitar playing, production skills, songwriting chops and other enduring qualities. He’s almost never thought of as a vocalist.) Cropper’s friend encouraged him to make a vocal record.

“And I did,” Cropper says. “It turned out pretty good, but I was learning how to sing then. I never was a singer singer, and I knew that, performance-wise. I could sing in tune musically, but so what? I don’t have the voice that most people have.” With great self-knowledge, he emphasizes the takeaway from the experience of making those records. “What the audience has accepted is when I sing something that I’ve written, like ‘In The Midnight Hour,’ ‘Knock on Wood,’ or ‘Dock Of The Bay,’” he says. “And they accept that, because they like to hear the writer … no matter how bad the writer is.”

But after releasing Night After Night, Cropper pretty much hung up the microphone and focused on following the famous advice given to him years before by Sam Moore (and again in the ‘80s by John Belushi): “Play it, Steve.”

Cropper has remained engaged with numerous production and sideman projects, both in the studio and onstage. And in 2008 and again in 2011, he collaborated on albums with former Rascals keyboardist-vocalist Felix Cavaliere. The co-billed releases Nudge it Up a Notch and Midnight Flyer featured the duo working together on songwriting and playing, with Cavaliere handling the lead vocals.

Even before those projects began, Cropper had been engaged in regular writing sessions with longtime friend Jon Tiven. After working as a music journalist in the early ‘70s, Tiven would go on to a long and creatively fertile popular music career: he’s played on albums by the Rolling Stones and Major Lance, produced Van Duren, B.B. King, Alex Chilton, Don Covay, Frank Black, Graham Parker and many others. He was a member of the Jim Carroll Band and (with Al Franken) the Tom Davis Experience. On his own and with others, Tiven has written more than 400 songs. Those are but a sampling of his myriad credits.

Like Cropper, these days Tiven lives in Nashville, Tennessee. As Cropper recalls, “we were in the middle of writing every week when Felix came around.” Cavaliere asked to contribute to some of the songs Tiven and Cropper had written; that conversation led to the two albums.

But the writing sessions yielded some material that for one reason or another didn’t interest Cavaliere. “He said, ‘I don’t want to finish these songs; I’m not going to sing them,” Cropper recalls. So the partly-completed tunes – many created using Apple loops as a tool – were set aside. “I just assumed they would be lost and gone,” he says

Fast-forward nearly a decade. “It was Jon’s idea to bring these tracks back to life,” Cropper explains. The best bits from those decade-old sessions would form the basis of Fire It Up, an album that the guitarist thinks of as his “first proper album” since 1969.

Cropper chuckles as he recalls the phone call that reignited the project. “Tiven called me and said, ‘I know you don’t want to make another record, but I’ve got all these tracks you did.’” The basic recordings already featured Cropper playing both rhythm and lead guitar parts. Multi-instrumentalist Tiven overdubbed bass guitar, keyboards and horns onto the decade-old unfinished tracks.