Songwriter Stephen Evans: Making Sure the Songs Hold Their Own 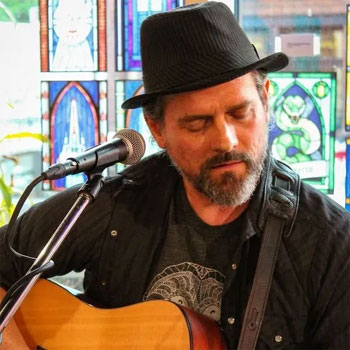 A lifetime performing musician living in Asheville since 1996, Stephen Evans plays live with his band the True Grits, as part of a songwriters’ collective and as a solo artist.

It’s one thing to perform as part of a group. But a solo show places all of the responsibility on you. How do you engage the audience, especially when you’re playing at a venue like a brewery, where people might not necessarily be there specifically to see and hear you?
I don’t force it; I do my thing and joke around to lighten the mood when I know I have captured some attention. I focus on playing as well as I can, and let the performance grab people. Connection with an audience is a big high for me.

For many years you were part of the live music scene in Atlanta. How is playing solo there different from gigs in WNC?
Atlanta was a lot more competitive back then, but Western North Carolina was and has always been more welcoming and less cutthroat. The scene here was a lot smaller than it is now, lighter on the amount of venues, and more concentrated with bluegrass, old time, folk and jam music. But now, the spectrum is much wider and there is an overflow of great talent. And the scene in WNC has a great community feel.

Your early immersion in playing music centered around the trumpet and performing in musicals. How did that background affect your approach to making your own music?
My background with musicals and trumpet influenced my desire to write strong melodies to sing. A good melody with some tasteful harmonies is very important to me.

For you, what are the hallmarks of a great song?
A strong melody, creative and almost poetic lyrics that tell a story or touch the minds and hearts of others. A fun beat doesn’t hurt either. If a tune holds its own with just a vocal and a guitar, then you have a solid song; everything else is color and dressing to make it extra cool.

You’ve talked about how music helped lift you out of depression. Tell me about what you view as the healing, restorative power of music.
I had given up on music because it was so difficult to get the ball rolling into the gig scene; I was disheartened and afraid to try again. But after my dog, Angie, had passed away in 2014, I just got fed up with being sad; I decided I was going to make a record and focus on that. In 2015, I released my debut album, Something to Bleed. It was a moment of pure joy; it so felt good to have a goal. Music is my way to connect with myself and something divine as well as release emotions and thoughts that have been spinning around in my head.