Home is Where the Synths Are: Sunset Lines Reinvents, Again 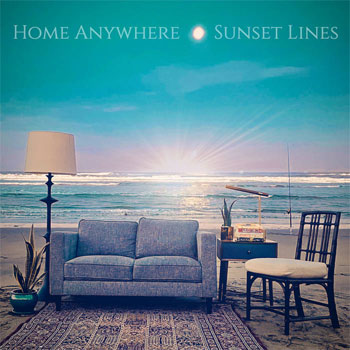 From arena-hopping festival headliners to the local garage band, COVID-19 forced musicians of all stripes to rethink, reorganize, and regroup. Fortunately for Liz Brooks and Paul McCorkle, the core duo behind Bay Area synth-pop project Sunset Lines, by the time the pandemic shuttered venues across the country they were already accustomed to starting over.

The group’s newest EP, Home Anywhere, ruminates on the many changes Sunset Lines have pushed through in recent years, and finds the band closer than ever to what they want to be.

When Sunset Lines released their 2017 EP, Slippery Slope, the band was new. In fact it had come together out of a previous group that had failed to launch. That guitar-driven project was very different from the keyboard-based textures that characterize Sunset Lines. “Our first EP was a reaction to that previous work,” McCorkle says. “Trying to get away from [that style], we started using more synthesizers, making it sound more lush.”

As pleased as McCorkle and Brooks were with the 2017 EP, they both feel that it didn’t quite capture the vision they had for Sunset Lines. “It was definitely a learning experience,” Brooks says. “Being the main songwriters for the first time, we were still kind of figuring out our sound.” McCorkle agrees, calling Slippery Slope “kind of primitive.”

Even in normal times, four years can bring a lot of changes. For Sunset Lines, the period between the release of their first record and the start of making Home Anywhere marked another reinvention and realignment for the band. “Our bass player [moved] to the East Coast,” Brooks says. “And our drummer moved to the suburbs to start a family.” By the summer of 2018 the group was effectively a duo.

And the shift in the group dynamic affected the process of songwriting. Brooks says that she found herself not having to “write for the style of anybody else we were working with.” In practice, that meant “funkier key changes, and softer sounds that wouldn’t always work for a live band.”

That experience was a learning process, too. Brooks says that only one song from that initial batch would make the cut as she and McCorkle began work on their second EP. “’Phototaxis’ is the one that really captured our sound,” she says. Once she and partner McCorkle – who also handles production for Sunset Lines – developed the new material to a partial stage, they brought in a new rhythm section. Bassist Scott Smit and drummer Ben Manning immersed themselves in the creative work of “taking the songs from sketches to complete entities,” McCorkle says.

While Sunset Lines is a synth band – one launched in part out of a desire to de-emphasize stringed instruments – there are guitars on Home Anywhere. “There are a lot of guitars,” McCorkle admits with a laugh. They’re just layered less prominently in the mix, he says. The Sunset Lines aesthetic is informed by an appreciation of artists as diverse as Stevie Nicks, MGMT and Tame Impala, and bears some similarity to late-period Roxy Music. The group’s sound is built on a foundation of classic ’70s and ’80s machines like the Roland Juno-106 and the Solina String Ensemble. McCorkle describes the latter as a “dream synthesizer. It’s fun to run through a bunch of pedals and make weird sounds.”

Work progressed on what would become Home Anywhere, and the EP was nearly finished in early 2020. “We had been playing a lot of shows,” Brooks says. “In March we were probably in our best ‘pocket’ with our rhythm section.” Sunset Lines had made plans to begin production on its first new music video in April 2020 in Los Angeles. “Clearly, that didn’t happen,” Brooks says.

Instead, Brooks says that she and McCorkle “hunkered down and focused on getting the album finished.” They worked remotely with their rhythm section. “Collaborating from far away was a first-time thing for us,” Brooks says. But the loss of live performance as a creative outlet gave rise to something else. “We started focusing a lot more on the visual art that goes behind our songs,” she says. She and McCorkle initially took a DIY approach, shooting and editing the videos themselves to hone their craft. 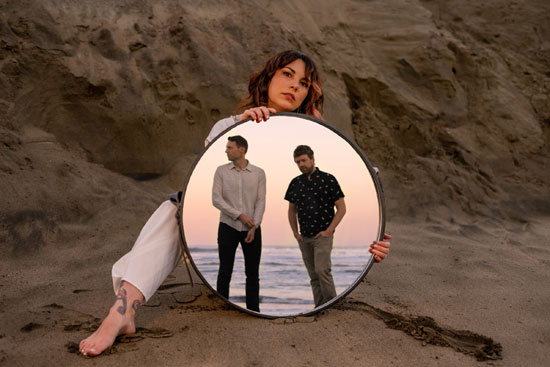 In October of last year, Sunset Lines reassembled in person for a professional video production, shooting a video for the EP’s opening track, “Unresponsive,” in Los Angeles. That session marked “the first time that any of us had worked on a music video during COVID,” Brooks says. “It was a lot of mask-wearing, a lot of temperature-taking.” The experience was a bonding and cathartic one for everyone involved.

Since that time, Sunset Lines has created more videos, returning to the DIY approach. The most recent video – featuring an EP track called “Season of the Witch” (not the Donovan classic) – was shot using only Brooks’ and McCorkle’s cell phones.

Even songs that had been written before the pandemic bear the marks of the worldwide lockdown. “Read the Whole Room” is based on a riff Brooks composed a decade ago. “One of its first lyrics is ‘13 days,’” McCorkle points out. “That’s where we were within COVID at the time. It feels like ages ago now, but at the time 130 days felt like a long time.”

Along the way, in the period marked by Sunset Lines’ launch, dissolution, hiatus, re-formation and enforced lockdown, something else happened: Brooks and McCorkle fell in love. “In 2015 we found out that we worked really well together,” Brooks says. And the two soon discovered that they connected romantically as well. The couple was wed at the end of May.

But changes continue for Sunset Lines. They’re not certain when, where, how or even if the band will play live, Brooks says. She and McCorkle recently moved from San Francisco to Santa Cruz. “That’s part of the EP’s title: Home Anywhere,” she explains. Because of the pandemic, “so many people are no longer tied to their location in the ways that they were before,” she says. “So whether it’s a dream location or just the people that you surround yourself, many people have made a new home for themselves in the past year in one way or another. And we’re trying to figure out the future, too.”