Open-mic music nights are fairly common at the bars and breweries in Western North Carolina. But responding to the challenges brought on by the pandemic, some enterprising musicians took the regular event in a new direction. A little weird and a lot intriguing, the Oklawaha Synthesizer Club (formerly the Hendo Synthesizer Community) isn’t just for synthesizers.

The group got its start a few years ago at Oklawaha Brewing Company, then known as Sanctuary Brewing Company, as an outgrowth of the brewery’s popular Open Mic Night. “It was pretty organic, really,” says Judson Rogers, who coordinates the monthly gathering. “Because of COVID, Open Mic Night stopped, and a couple of us thought, ‘How can we do an ‘open mic-less’ night?’ And it just worked out that we had electronic instruments.” 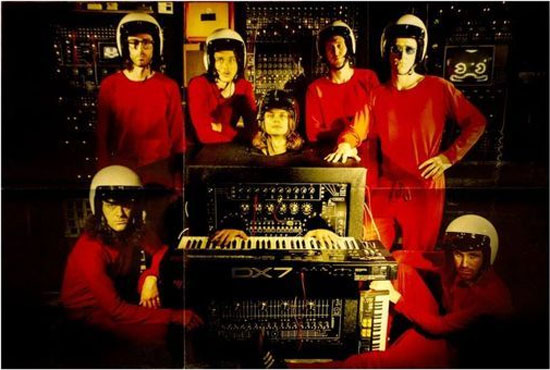 Rogers was a professional touring musician for many years; billed as Sumsun, his work appeared on a number of compilations. Sumsun’s music is a tuneful, immersive mix of melody, hypnotic beats, and atmospheric washes of warm analog synthesizers. These days, Rogers is settled in Hendersonville, and making music with like-minded friends is a form of recreation for him.

“Ten years ago, I used to play in Asheville a lot, at the Grey Eagle, the Mothlight, and a DIY venue called Apothecary,” he says. But when those scenes began to fade a bit, Rogers says he “kind of looked inward, and instead of driving up to Asheville, I started pursuing it in Hendersonville.”

Along with Rogers, the core group includes fellow musicians Marshall Williams and Ryan Fletcher. “There are four or five —maybe even six — other people who show up regularly,” Rogers says. He brings along Elektron digital and analog synthesizers, but the instruments at any given gathering are a varied lot. “We change it up every time, so we have different instruments,” says Rogers. “That keeps it fresh.”

“I bring a mix of modular, analog, and digital equipment,” says Williams, whose interest in synths dates back to his teenage years spent immersed in ’80s new wave and more modern artists like Nine Inch Nails. “I like to bring my DFAM and Mother-32 synthesizers that I got from the Moog store in Asheville,” he notes.

Fletcher often brings his electric bass guitar to the Oklawaha Synthesizer Club meetings. “I run it through an effects processor that has tons of presets for distortion, delay, and some strange synthesized noise,” he says. “And I have all that connected to a loop pedal for layered ambient sounds.” He admits that his own direct experience with synthesizers is limited. “But I’ve learned a lot playing with these guys,” he adds.

The music OSC makes is a fascinating blend of structure and free-form jamming. “Judson has a ton of tunes, and Marshall has a few as well,” says Fletcher. “We typically jam along with those, and at least once during the night we’ll attempt a free-form jam.”

“For the jams,” Rogers says, “we start with an idea, and then we leave that idea and go wherever the group is going.”

Of course, most of the people frequenting Oklawaha Brewing are there for beer and socializing. It’s fair to wonder how they react when they discover a group of mad scientists making music on strange-looking instruments. “Some people are really taken aback that we’re doing this in Hendersonville,” Rogers says with a laugh. “Sometimes older people will come up and say, ‘This is really interesting. I didn’t know anyone was doing this.’” And he notes that younger people are impressed that they “don’t have to go to Asheville or a bigger city to see something a little different.”

And it really is different — especially in a region better known for singer/songwriters, Americana, and old-fashioned acoustic instruments. “What we do is naturally unusual to most observers,” Williams concedes. Ryan and I ‘bring the weird,’ but it’s always a fun time.”

And OSC is very much an open group; when someone else wants to wander into the Club, they’re welcomed. “At the most recent meeting, Joe, the owner of Oklawaha, played drums with us,” Williams says. “One night we were doing a free-form jam, and a local celebrity joined us on recorder/flute,” says Fletcher. “It was amazing.”

“You can bring a guitar, a banjo, anything — you could bring a kazoo,” says Rogers. “We’ll welcome you with open arms. Any skill level, any instrument. As long as you want to have fun, that’s what we’re trying to do.”