Eddie West knows guitars. As the owner of Area 22 Guitars in the heart of Brevard, it’s his business to know what musicians want in electric and acoustic guitars and other stringed instruments and accessories. But for him, it’s more than business: it’s a lifelong passion.

West, a North Carolina native, describes his first guitar as a “piece of junk.” The strings were so far off the neck that it was near impossible to play, much less tune. He soon upgraded to a better instrument. “But after playing for four or five years, I realized I wasn’t getting significantly better,” he recalls with a laugh. So he signed on with a teacher in Asheville. “He set me on the right path to really learn the guitar,” West says. “theory, harmony, all that stuff.”

He was hooked. “So in 1982 I went over to UNCA to see what kind of courses they were having,” he recalls. “They said, ‘Well, we just added a music program!’ And I said, ‘Sign me up!’” West studied music and audio engineering, and upon graduation he and a friend opened a recording studio of their own, Heart Recording. 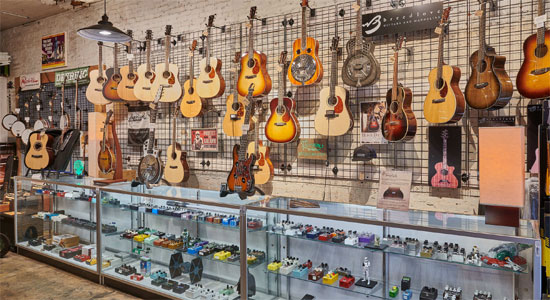 But as much as Western North Carolina is a hotbed of musical activity today, in the late ‘80s West may have been a bit too far ahead of the curve. “The music scene in Hendersonville just wasn’t going to support a recording studio,” he says. “So in 1990, we moved the studio down to Charleston.”

The studio thrived in the coastal city, but West was homesick. “I missed the mountains,” he says. So in 2004, he and his wife moved their family back to Western North Carolina. Once settled, he started teaching guitar. And he started thinking out loud about opening a guitar shop. He knew the kind of quality, craftsman-made guitars he liked, and he believed that he wasn’t alone in his desire for to avoid mass-produced instruments.

Guitar manufacturers Fender, Gibson, Martin and others are globally popular makers of musical instruments. But in his dealings with fellow musicians, West was convinced that Western North Carolina would be a good market for guitars and amplifiers that don’t roll off an assembly line. He believed that many of the region’s musicians prefer the kind of gear that’s hand built by artisans, not factory workers.

So he opened his shop in 2007, carrying instruments made by luthiers, as well as amplifiers built by artisans like Fred Taccone at Divided by 13 Amplifiers in California. “Some of my guitar builders could be a four- to five-man shop,” West says. “They just want to make a good product, and make a decent living doing it. It’s small business America with these guys, and I love being a part of it.”

Once you play a good boutique guitar or amp, “you never go backward,” West says. He believes that for anyone serious about buying a quality guitar or accessory, there’s only one path. “The first thing they’ve got to do,” he says, “is do their research. And then get to a shop and play something.”