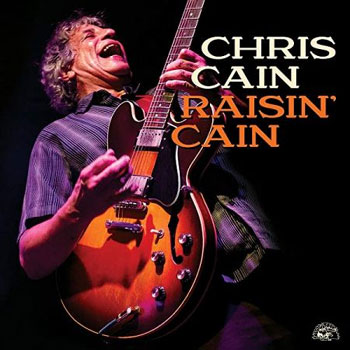 Though he’s a West Coast musician based in San Jose, California, Chris Cain’s vocal and guitar styles owe a significant debt to Mississippi-born B.B. King. As showcased on Raisin’ Cain, his first album for Alligator Records, Cain’s approach to the blues is one steeped in the postwar electric tradition.

Lyrically, Raisin’ Cain traffics in familiar blues territory, with street-level stories and sentiments that connect with listeners without pandering or cliché. Cain’s expressive voice – with phrasing influenced by Ray Charles and delivery informed by B.B. – is the idea vehicle to put his lyrical ideas across. And Cain’s lean, powerful lead guitar lines are melodic in the extreme, propelling the songs forward rather than overwhelming them with showiness.

Raisin’ Cain follows on with key elements that made his self-titled 2017 album (released by the Little Village Foundation) so successful. Producer and fellow guitarist Kid Andersen led the sessions at San Jose’s Greaseland Studios. The arrangements across the album are varied: half the numbers feature a four-piece horn section led by Michael Peloquin.

Cain’s recorded debut was 1987’s Late Night City Blues; he’d go on to release three records for Blind Pig, and made several more for his first label (Patrick Ford’s Blue Rock’it) and self-released a few as well. As Dick Shurman notes in Raisin’ Cain’s liner note essay, the guitarist tried years ago to get onto Alligator, but they passed. In 2021, however, he seems right at home on Bruce Iglauer’s label.

Cain knows his way around electric blues. “I Don’t Know Exactly What’s Wrong With My Baby” sounds like a lost B.B. King track, and his Albert King-flavored extended lead on the big-band backing of “Out of My Head” is the icing on a very tasty cake.

The most unusual cut on the album is the last one. For “Space Force,” Cain puts down his electric guitar and steps up to an Arp Soloist, a vintage synthesizer that ceased production in 1977. The compact monophonic (one note at a time) keyboard has a distinctive sound all its own, and Cain smoothly integrates the instrument into a playful, uptempo blues arrangement. Here he’s channeling George Duke or Steve Wonder more than the three Kings, but “Space Force” makes a credible argument for the synthesizer as a credible conduit for the blues. The tune has more traditional elements, too: Andersen takes a brief melodica solo, and keyboardist Greg Rahn – who excels throughout the record – turns in some nice organ washes and a tasty electric piano solo.

The appealing if atypical “Space Force” aside, Raisin’ Cain keeps its focus squarely on good-timing, catchy blues, played with feeling, finesse and conviction. It’s sincere without being insular, expertly produced but not slick, and true to the spirit of blues without being imitative. Fifteen albums in and at age 65, Chris Cain is turning out the best work of his career.

You may also enjoy my 2018 interview with Chris Cain.