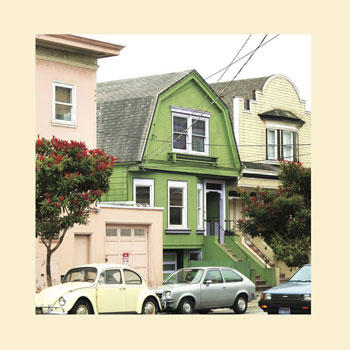 Glenn Donaldson is prolific. Maybe not quite Robert Pollard or R. Stevie Moore prolific, but the man records and releases a lot of music. The Skygreen Leopards, his psych-folk collaboration with fellow multi-instrumentalist Donovan Quinn, put out seven albums in eight years, plus another in 2014. Another duo, The Art Museums, featured Donaldson working with The Skygreen Leopards’ Josh Alper; that project released an album and three EPs in the space of just over a year. Donaldson has also appeared on records by Woods, Thuja, The Fresh & Onlys and at least a dozen others.

But along the way, the Bay Area musician and composer has found the time to launch and sustain a solo project as well: the “DIY kitchen pop” of The Reds, Pinks and Purples. Between September 2019 and now, he has created three full-length albums and an EP under that name. Released in April, Uncommon Weather is the latest from The Red, Pinks and Purples. And there’s plenty more where that came from.

“I record more than I release,” Donaldson admits with a chuckle. “I’m kind of pulling stuff from far in the past [along with] brand new stuff. I’ll tend to revisit old ideas and say, ‘Can I do something with this?’” Quite often the answer is a resounding yes.

A highlight of the new album, “Don’t Ever Pray in the Church on My Street” was written and demoed in 2015. At that time, Donaldson was briefly between bands, so he shelved the song. “But I felt like it was special,” he says. “I wrote it when I had a fever. There’s that legend about Neil Young writing ‘Cinnamon Girl’ when he had a fever, so…”

But The Reds, Pinks and purples don’t display a great deal of the fuzzed-out proto-grunge of Crazy Horse. Instead, Donaldson’s solo work under that moniker feels more connected to the jangling sounds of ‘80s college rock, particularly the “paisley underground” vibe of bands like Green on Red, The Rain Parade and the Dream Syndicate.

“I grew up in the ‘80s in Southern California,” Donaldson says. “So I was aware of the paisley underground. Some of my favorite music was The Three O’Clock and The Rain Parade.” He recalls seeing an MTV special on R.E.M., one that featured Roger McGuinn (The Byrds) and John Sebastian (The Lovin’ Spoonful). “From a very early age, I caught onto that ‘‘60s meets new wave’ sound,” he says. But later bands like Dinosaur Jr. and Guided by Voices influenced his own songwriting to a similar degree.

“I’m a student of songwriting,” Donaldson says. And with The Reds, Pinks and Purples, he seeks to make music that is accessible. “I was really thoughtful about making the songs relatable,” he says, “so that maybe instead of just being called ‘indie pop,’ they could actually be pop music.” In his world, pop is not an epithet. “I’ve done my time in the sub-underground,” he says with a laugh. “I don’t mind being on the radio. There’s nothing wrong with it!”

Donaldson says that despite his best efforts – The Reds, Pinks and Purples recordings sport a uniformly high production quality – his solo releases still get described by radio deejays as lo-fi. “Which is fine,” he says. “But it’s meant for a broad audience.”

The pandemic sidelined the live version of the project. “We played about ten shows, and we were about to go play in Spain,” Donaldson says. But he isn’t feeling sorry for himself. “Many other people had much worse outcomes from the pandemic.” Still, he looks forward to gigging in support of Uncommon Weather. “I have a wonderful band here, and they get to interpret the songs how they want,” he says. “It’s different from the recordings, but that makes it fun for me.” He’s thinking about heading to Spain toward the end of this year. “Hopefully, I’ll kind of put the microphone down for a little while and just enjoy playing some of the songs with my friends,” Donaldson says. 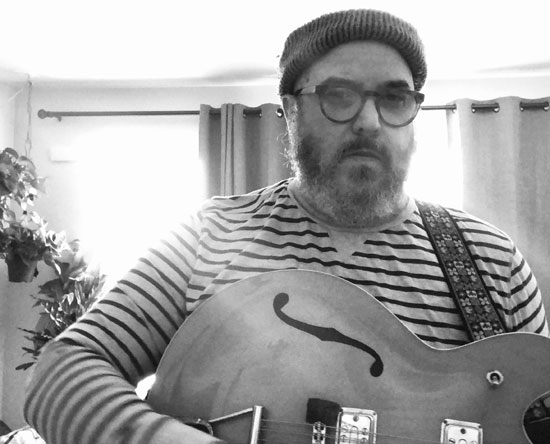 But in the meantime, Donaldson continues to pursue The Reds, Pinks and Purples as a studio endeavor. “For this project, I really focus on the songwriting,” he says. “And I’m pretty versed in using the studio as an instrument.” He describes his method of recording in his kitchen as “a search for the sound along with the song. The hard part is getting the song written. Then, the fun part is just splashing colors on when I record.” And he emphasizes the listener-friendly nature of the music. “I wanted to make it a little more accessible and listenable for people who didn’t have a taste for the esoteric music that I come from.”

Donaldson says that like The Reds, Pinks and Purples’ other albums, Uncommon Weather is “an elusive portrait of San Francisco.” But what does that mean? “It’s about me and my time here, forming bands and just living my life,” he explains. “There are specific references to the neighborhood and locations throughout the songs.”

At the same time that Donaldson plays up the tuneful nature of his solo project, he labels it “depresso pop.” He laughs when the term is brought up. “That’s sort of tongue-in-cheek,” he says. “Someone gave me that tag in a review, and I thought it was funny.” In fact, though some of his song titles might suggest a kind of mopey, navel-gazing character (“I Hope I Never Fall in Love,” “I’m Sorry About Your Life”), for The Reds, Pinks and Purples, humor is often a part of the mix.

“A song like ‘A Kick in the Face (That’s Life),’ I mean, that’s ridiculous!” he says. “It’s completely over the top.” But at the same time, he says, “sometimes life is a kick in the face, and all you want to do is go home and drink.”

Or record another album’s worth of songs. “The follow-up album is already at the pressing plant,” Donaldson reveals. “That’s coming out in the fall … and it’ll be a double album.”