Steep Canyon Rangers: Arm in Arm with Their Fans 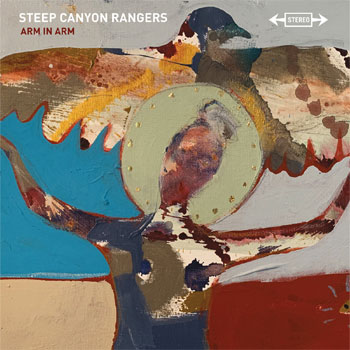 Steep Canyon Rangers have been on a roll of late. Over the last decade, the North Carolina group has released an album of new music on a nearly annual basis. March 2020 saw the release of Be Still Moses, which is – depending on how one counts – the band’s 15th album. And in October came Arm in Arm, another set of new material. The new songs strike a personal tone, and feature the group’s well-honed instrumental and vocal interplay. There’s a wistful yet resolutely hopeful character to the songs, just the right tonic for a difficult year. And while the pandemic precludes a tour in support of the new album, the creative group has found a way to meet that challenge. Guitarist-singer Woody Platt spoke to us about the new album and the select live shows.

What led to the band recording in Nashville this time, instead of closer to home here in North Carolina?
Woody Platt: There are so many reasons. One was the studio, Southern Ground: its history, its quality and the vibe in the studio. One of the other reasons is that Brandon Bell is the lead engineer and studio manager; he’s the guy who we worked with when we made our Grammy-winning record Nobody Knows You; we really respect him and enjoyed working with him.

Also, the experience of recording away from home creates full band immersion. In this case, we parked the bus in front of the studio. You get to work, and you don’t really let up. And when you get done with work, you’re still all together, so you can continue to be creative and stay focused. There are a lot of arguments to be made for staying “in the zone” the whole time.

Some music is the product of jamming, of collaboration in the creation from the ground up. Other music is composed, and then the band gets together and develops a full arrangement. For the making of Arm in Arm, which was it?
It’s a combination of the two. In our case, songs are brought to the band, and then they go through the Steep Canyon Rangers process, which is not a quick process. We’re a democracy, and everybody’s voice is heard; everybody’s ideas are tried. And so, songs take a while. It’s rare that one just appears. There are some songs on this record that have been around for years … and I mean lots of years!

It’s a fun process if you can be patient with it. And we’ve always been good at that. I’ve always respected Graham [Sharp, the group’s primary songwriter] for his willingness to be patient. Because songs are such a personal craft, and when you bring them to a band – especially a band with a lot of opinions – you have to sit back and be willing to hear thoughts and ideas. But that’s what develops the sound of a band.

Steep Canyon Rangers has been scheduling drive-in concerts. Tell me about the thinking behind that.
There’s so much uncertainty in the business right now, with no live shows to speak of. So we wanted to bring some music, spread some joy, bring some good will to our communities. Come Hear NC, which is the North Carolina Arts Council, was a sponsor. We were able to do these shows free to the public.

We used the connection that we had through Steve Martin to get access to a really state-of-the-art, cutting edge mobile rig. We have an LED screen and a fold-down stage, and the ability to transmit the sound to the car stereos through a short-range FM radio transmitter.

It was very rewarding, but it was challenging. We’re used to having a loud PA around us when we play, but for this we had no amplification other than the microphones to the console, straight to the [radios in the] cars. We didn’t want to blast it on stage; we wanted people to be in their cars for social distancing needs.

We streamed each one of those shows, and we let our sponsors choose a charity of their choice on their stream. I think this model could have some legs, and could continue to happen.