Album Review: Last Days of April – Even the Good Days Are Bad 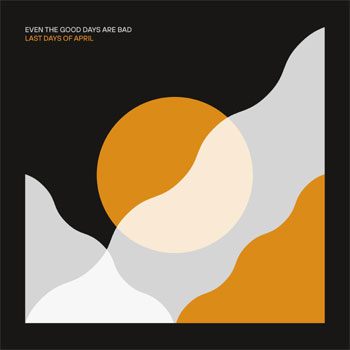 If one were to combine hooky songwriting, a lush pop landscape and a bit of shoegaze, the result might approach Last Days of April’s Even the Good Days Are Bad. The downbeat message of its title notwithstanding, this is a lovely collection of emotion-laden tunes that feature indelible melodic lines.

There’s a pleasing variety to the album’s eight songs. Chiming guitars are all over the record, but there’s an aesthetic that somehow combines intimate/close-up with gauzy/woozy. It sounds like a Chamberlin on “Had Enough,” and that off-kilter keyboard – plus some dissonant tones that persist through the song – underscores the unsettled lyrical character of the album.

The songs are inviting, but they benefit from close, attentive (and repeated) listening; that approach helps to reveal the charms within. And those charms are many: “Turbulence” has a character reminiscent of Pete Yorn’s early work. “Alone” rewards listeners who stick around hoping for a rocker.

Songwriter Karl Larsson and his band seem intent upon using a different keyboard texture (or two) for every song on the record, and that approach is an effective one. Even though every track is different from the one before, there’s a unity that holds everything together as an album rather than a mere collection of songs.

Taken as a whole, the songs on Even the Good Days Are Bad create an ambience that seems to capture a slice of the band’s Stockholm. When I last visited there, I was struck by the manner in which locals relate to weather: a sky filled with high, pale grey clouds is described as clear. (We’ve since chosen to refer to such days as “Stockholm clear.”) And that grey-not-quite-sunny vibe is conveyed in these tunes. Even the relatively chirpy “Anything” isn’t truly upbeat. Things are not what they at first seem to be.

Speaking of misleading titles, “Downer” — which closes the album — is the best track. It distills all of the record’s virtues into a single song; its repeated lyrical message and extended run time combine to wonderfully hypnotic effect; nearly nine minutes and it never threatens to wear out its welcome. And that underscores an important fact about Even the Good Days Are Bad: even its average songs are good.