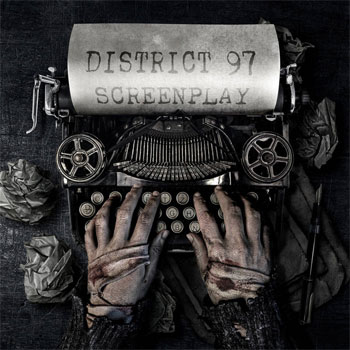 Like, I suspect, more than a few potential listeners, I looked askance at District 97 when I first heard of them more than a decade ago. What possible skill could a former American Idol finalist display in the progressive rock idiom? Well, I and others like me were quickly set right: Leslie Hunt has an impressive set of pipes, as well as the skill, power and finesse to deliver the progressive goods. And she’s backed by a superb ensemble of players. District 97 has since made an impressive string of studio albums, and has collaborated with the likes of John Wetton (before his untimely passing).

This new collection is a 2CD set, primarily featuring live performances; it’s a non-chronological survey of the band’s work going back to 2011. But there’s a seamless character to the collection that keeps it from sounding or feeling like an odds-and-sods set. There’s a curiously flat ambience to the recordings, but remarkably enough, that’s not a problem, not at all. The production aesthetic (courtesy, one guesses, of drummer/producer Jonathan Schang) gives a kind of immediacy to the proceedings, a sort of this-hasn’t-been-tampered-with character that contrasts with such faux-live albums as Kiss Alive and Thin Lizzy’s Live and Dangerous, to name but two egregious offenders.

Of particular note is “Bread and Yarn,” one of the best D97 tracks. First heard on 2019’s Screens, the live version is full of passion, fire, grace and subtlety. The song is a vocal duet par excellence, but the instrumental work is nothing short of stunning, too. It doesn’t sound at all like Steven Wilson, but it displays a level of quality not far removed from his work.

As rock-solid and inventive their original compositions are, District 97 also excels at interpreting the classics. And by classics I mean Yes’ “Long Distance Runaround,” a brief reading of John Lennon’s “Jealous Guy,” a clutch of Bill Bruford tracks(!), a UK number, a track form Genesis’ The Lamb Lies Down on Broadway, a Led Zeppelin gem, and two King Crimson numbers: “21st Century Schizoid Man” (with Wetton) and the mighty “Red.” The selection of tunes allows the band to pay tribute to its influences as well as show off the individual members’ technical skill. Sometimes they play it so close to the original that you’ll wonder if it’s them or not (see: “Red”) but even then, it’s an enjoyable ride.

Sometimes, live albums are a placeholder while an artist sorts out the next move. And in the pandemic era, that’s understandable. But Screenplay succeeds on its own merits.