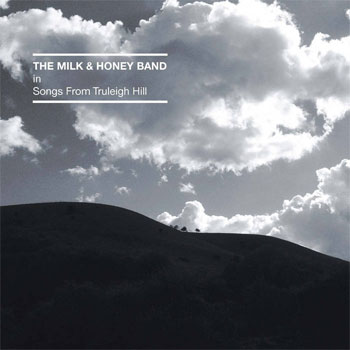 The Milk & Honey Band first came to my attention well more than a decade ago when Andy Partridge (formerly of XTC) released their album Dog Eared Moonlight on his Ape label. I was immediately won over by the group’s sound, which as I mentioned at the time – Partridge described as “a bit like the Who with acoustic guitar. Or, almost like the Moody Blues, but with more fire.”

This British group hasn’t been especially prolific since then; before 2009’s Dog Eared Moonlight there had been The Secret Life of the Milk and Honey Band in 2004, and (slightly) more recently there was In Colour, released in 2010. Since that time, the group’s association with Ape House Ltd seems to have ended, and these days The Milk and Honey Band appears to be Robert White working alone. Even when the band was a band, White was primary songwriter, arranger and producer.

What that means is that the long-awaited new album, Songs From Truleigh Hill, doesn’t espouse a radically different musical approach than its predecessors. White’s wonderfully subtle songwriting remains the core and foundation of the music. The most significant change from Partridge’s description is that listeners are quite unlikely to think of the Who when they listen. Pete Townshend, just maybe. More likely Songs From Truleigh Hall might lead them to think briefly of the gentler, ore tuneful moments of Coldplay at their best (and, importantly, with none of that group’s unappealing tendencies). And – perhaps not surprisingly, as many years have passed – the fire Partridge mentioned is wholly absent.

None of these changes detract in the slightest way from the overall effect of the music. The quiet, understated feel of the songs draws the listener in, and there’s a crystalline, foggy-grey-day melancholy vibe that gives the songs a quality that wouldn’t be out of place as the sonic accompaniment to some long, establishing tracking shots in a Northern European crime drama (The Killing, Wallander, The Bridge, Shetland … you get the idea).

Yet White’s songs are perhaps too strong and individualistic to be relegated to such a fate; they deserve to be experienced on their own, as a collection of nine songs sequenced in a certain way. As an album, you might say.

A few listeners might miss the electric textures that adorned the M&HB’s music of yesteryear. But White is older, (one suspects) Wiser and certainly possessed of a decade-plus’ worth of life experiences. And this is where he is today. And if you appreciated his earlier work even a bit, it’s where you should be as well.