Album Review: Jimmie Vaughan – The Pleasure’s All Mine 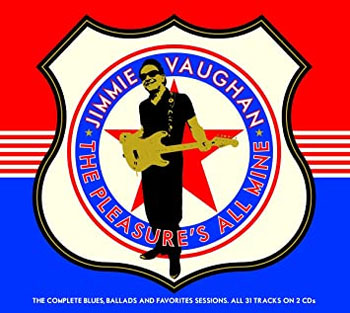 Among the wider population, Jimmie Vaughan is known as the older brother of Stevie Ray Vaughan, as the founding guitarist in the Fabulous Thunderbirds and for his work with that group during its most high-profile period. But blues aficionados have long appreciated the Texas-born musician for the music he has made under his own name as well.

Vaughan’s solo debut was 1994’s Strange Pleasure, a diverse and well-received set heavy on original material. Subsequent releases continued to steer clear of the pop mainstream while offering wide appeal. And in 2010, Vaughan released a the first of two albums under the “Blues, Ballads & Favorites” banner. Jimmie Vaughan Plays More Blues, Ballads & Favorites followed in 2011. Both have been out of print for several years.

That pair of releases was a wholly successful exercise in both archival digging and expression of the wide array of influences that inform Vaughan’s own musical style. Newly reissued as a single package, this set reminds listeners just how eclectic and lively an artist Vaughan truly is. Lou Ann Barton provides vocals on several tracks, including a soulful reading of Don and Dewey’s “I’m Leaving It Up to You.” Vaughan displays instrumental fireworks on “Comin’ & Goin.” The band rocks hard on Guitar Junior’s “Roll Roll Roll.” And backed by a beefy horn trio, guest Barton makes Little Richard’s “Send Me Some Lovin’” her own.

Throughout the collection, Vaughan’s choices of material and the manner in which he renders the tunes help connect the dots between swing, jump blues, r&b, straight blues and good old rock ‘n’ roll. In Vaughan’s hands, genre classifications melt away, leaving behind something most accurately described as American music.

Vaughan’s appealing, saucy vocal work shows him to be a latter-day kindred spirit of Louis Prima, and his understanding of jump blues identifies him as a latter-day heir to the uptempo work of pioneer Louis Jordan. And though he’s a guitarist, Vaughan’s arrangements never find him hogging the spotlight; far more often than not, these are ensemble tunes, and they’re presented that way. The two originally separate albums are truly of a piece; Vaughan’s no-frills production aesthetic is the glue that holds the various musical styles together.

A collection bringing together the original versions of these sometimes under-the-radar nuggets would be a highlight of any collection; Vaughan’s interpretations of the tunes – sometimes reverent, other times showing some inventiveness – is very nearly the equal of that concept.

The combined reissue of these two albums features new artwork, a brief liner note essay from Malcolm Mills and the liner notes and credits from the original sets. The collection is available in both a 2CD and 3LP format. The original versions of these albums did receive a limited vinyl release at the time, but today copies are quite rare; a vinyl version of the 2010 volume will set the purchaser back more than $150. This new 3LP set of The Pleasure’s All Mine: The Complete Blues, Ballads & Favorites Collection can be had for a fraction of that investment.