Album Review: Badfinger — No Matter What: Revisiting the Hits 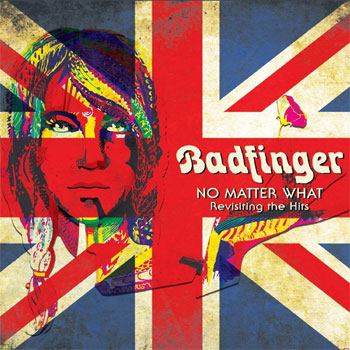 The appearance of this CD in my mailbox elicited a cringe: would it be terrible? A crass attempt to capitalize on the reputation of a band that made some of the best music of its era? An undistinguished, middling effort? Something else?

The cover art and packaging did not allay my fears. A Union Jack? Yes, all four of Badfinger’s prime-era lineup were from the UK (two from England, two from Wales), but the group never traded in such imagery, leaving it instead to The Who. And some strange, clip-arty graphics superimposed over the flag suggests … what? Hippies? A Native American? Who knows? The stylized Badfinger typeface is clearly intended to evoke thoughts of Straight Up, the band’s 1971 LP. And if one is being unkind, the title has an unintended meaning: No matter what, it seems to warn us, we’re revisiting the hits.

Open the package and remove the disc, and you’ll see that the lineup of this ersatz Badfinger is Joey Molland (a member of the band during its most well-known years, songwriter of exactly zero of the band’s hit singles, and lead singer of the same number of hits) … on vocals and bass, not his primary instrument of guitar. The other two core musicians are Jürgen Engler (member of German industrial band Die Krupps, producer, guitarist and ubiquitous figure on Cleopatra Records projects) and multi-instrumentalist Adam Hamilton (formerly of hair metal band L.A. Guns) on drums. Alrighty then. And recently I learned that the basic tracks for some of these recordings were laid down as long as as a decade ago; some may have even been released before without the “guest” overdubs.

Original Badfinger members Pete Ham and Tom Evans – who wrote the lion’s share of the band’s best material and all but one of its hits – as well as drummer Mike Gibbins are no longer alive. As the sole surviving member of the best-known lineup (1970-74), Molland claims some rights to the band name. Using similar reasoning, however, Ringo Starr or Paul McCartney might put together a band and call it the Beatles. It’s been my understanding that when performing, the guitarist must append “Joey Molland’s” to the band name. That’s certainly not done here; if an unsuspecting buyer purchases it without noticing the fine-print Revisiting the Hits, they may feel misled.

The above hints at the reasons for the skepticism I brought to this CD prior to hearing it. Learning that each of its ten tracks features a guest artist (usually but not always singing lead) made me curious but no less concerned. Setting aside the questions as to whether there’s any creative/artistic justification for a re-re-recording of Badfinger’s hit songs (and some worthy deep album tracks), the question remains: are these versions any good when considered on their own? The answer is: sometimes, yes; too often, no.

Mark Stein is best known as the lead singer of Vanilla Fudge. That’s him gesticulating wildly and wonderfully over-emoting on The Ed Sullivan Show when performing “You Keep Me Hangin’ On.” Here he provides soulful – if unnecessarily histrionic – vocals and flourishes of Hammond organ on top of a faceless if workmanlike remake of “No Matter What.”

Rick Wakeman of Yes adds piano filigree to the Paul McCartney-written “Come and Get It.” Wakeman’s playing is always brilliant, but this song doesn’t need fancy piano. When McCartney gave his one-man-band demo of the song to Badfinger, it came with strict instructions: sing and play it exactly the same as I have done. There was a reason for that. Molland’s weedy vocals – never his strong suit – are no match for those of the late Tom Evans, even in the age of Autotune.

“I Don’t Mind” is an Evans-Molland co-write, an album cut from 1970’s No Dice. Buckinghams’ Carl Giammarese does a nice job on vocals here, making it a standout track on the album.

The orchestration – courtesy the Manchester String Quartet – on “Day After Day” is lovely, and Ian Anderson’s flute is nice enough, if superfluous. Terry Reid’s backing vocals prop up another weak lead vocal from Molland. He simply can’t hit the notes that Pete Ham – one of rock-pop’s best-ever singers – could.

“Love is Gonna Come at Last” really should have been a hit. Originally recorded for the Molland/Evans Badfinger of the early ‘80s, the Molland-penned tune is among the best things the guitarist ever wrote. Guest singer Rick Springfield does a creditable job on the tune, and Engler faithfully re-creates Molland’s fine lead slide guitar work. But why Molland doesn’t play those guitar parts himself remains a mystery.

Matthew Sweet is an artist of unassailable taste. His guitar work on a faithful remake of “Baby Blue” is nice, and his backing vocals provide a sonic crutch for Molland, who gamely attempts to sing Tom Evans’ parts. Still, with due respect to Sweet, the guitar fills are somewhat gratuitous, seeming to exist mostly to telegraph Hey, I’m here rather than to add anything of value to a song that really can’t be improved upon.

“Midnight Caller” is fascinating; The Legendary Pink Dots’ Edward Ka-Spel adds Mellotron and Leslie’d keyboards to the arrangement. The song otherwise follows the original very closely, and once again Molland strains unsuccessfully to sing Pete Ham’s beautiful lead vocal lines. Still, “Midnight Caller” is among the best non-single Badfinger tunes ever written, and this arrangement does in fact do justice to it.

Molland’s stinging slide guitar work is at the core of Badfinger’s original recording of his “Suitcase.” But here it’s guest guitarist Sonny Landreth(!) playing, and Molland doing his best to re-create his 1971 vocal. Landreth plays impressively, but as his reading is a nearly note-for-note remake of Molland’s original guitar work, its reason for existing can be called into question.

“Sweet Tuesday Morning” is another Molland tune. Albert Lee overdubs guitar while Molland turns in a vocal performance that is – shall we say – of a piece with his other work on this album.

“Without You” was completely and brilliantly re-imagined by Harry Nilsson (and later robbed of all nuance by Mariah Carey). But the original Badfinger version is oddly underdeveloped, and doesn’t rank among the band’s better recordings. The remake follows that version, and features a giant talent – Todd Rundgren – on guitar and vocals. (An odd choice, this, as while Todd did produce Badfinger, he didn’t work on this song.) Sadly, the recording is rote, forgettable, and does nothing to distinguish itself. In the context of Rundgren’s massive and superb body of work, it’s four-plus minutes best forgotten.

Even for listeners who’ve somehow failed to acquire the original – and in every single case superior – recordings of these songs, there’s simply no reason to purchase this album. For fans of the artists involved — Springfield, Anderson, Rundgren, Landreth et. al. – there’s nothing here to warrant their attention. For fans of Joey Molland, they’d do better directing their attention to the album he released last year with Mark Hudson. Be True to Yourself features sturdy songwriting, solid musicianship and Hudson deftly glossing over Molland’s vocal inadequacies by way of massive overdubs. That album – unlike No Matter What: Revisiting the Hits – has a legitimate reason to exist.

A notch or two above dreadful, this release at best is little more than a minor curio, and at worst the latest in an ongoing run of cynical and deceptive attempts to cash in on the good will associated with one of the finest bands of the early ’70s. Beyond that, it does nothing to burnish the reputations of any of its participants. Caveat emptor.