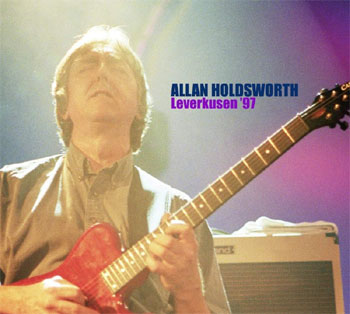 When progressive/fusion guitarist Allan Holdsworth passed away in April 2017, he left behind a substantial body of work. Not long before his death, Manifesto Records put together an impressive boxed set, The Man Who Changed Guitar Forever! (he had issues with that title, as he told me in his next-to-last interview before his death).

And he left the musical part of his estate in capable hands. Since Holdsworth’s passing, Manifesto has released a steady stream of high quality material from the vaults. Focusing on different parts of his ever-evolving musical journey, those sets – mostly live releases – have taken the form of CD+DVD packages.

The latest of these is Leverkusen ‘97, a live performance in which Holdsworth is joined by drummer (and Zappa associate) Chad Wackerman and bassist Dave Carpenter. The 11-song set includes four songs from the then-unreleased Sixteen Men of Tain LP, widely consider among the best from his remarkably consistent body of work.

Holdsworth’s fluid, legato style of guitar playing could easily have been applied to smooth jazz; its tone often fits into that category. Had he done so, you likely wouldn’t be reading this review right now. Happily, his approach to music was far too sophisticated and complex. It’s challenging stuff, to be sure, but there’s a melodic sense at the core of his playing that pulls it in the direction of accessibility even when it’s complicated and out-there.

That helps explain the influence that Holdsworth’s playing has exerted. It’s nigh on impossible to imagine a Steve Vai or an Eddie Van Halen without the influence of Allan Holdsworth. For this listener’s money, he’s far more interesting than either of those guitarists, which is why continued posthumous releases from his body of work are most welcome. With Leverkusen ‘97, you can luxuriate in the heady, hypnotic sounds of Holdsworth.