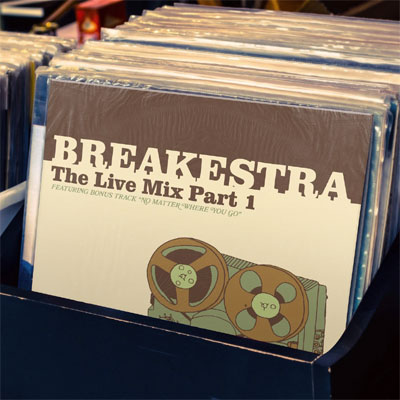 A central component of some of the best hip-hop is the repurposing of tasty licks, breaks or other snippets from previously-record music, creating something new out of the old. Los Angeles-based Breakestra takes things a step farther (or backwards, depending on your point of view). However you describe it, it’s inspired.

Breakestra’s debut album The Live Mix, Part 1 was released in 1999; they’d go on to release three more albums in a similarly-themed vein. Now Rare Sounds has reissued the group’s debut, this time on vinyl where it belongs.

Breakestra’s approach to to cover the songs from which the hip-hop acts drew their samples. But instead of sampling, they play the songs on, y’know, actual instruments. The Live Mix, Part 1 is a seamless work that strings together classics from Jimmy Smith (“Rootdown”), the Meters, (“Little Old Money Maker”), Herbie Hancock, Marvin Gaye and more.

The grooves are deep, the feel is funky, the playing is somehow loose and tight at once, and the vocals form Mixmaster Wolf are a cross between scat jazz and the kind of shouting employed by James Brown to keep his band moving along. The band doesn’t engage in slavish covering, either: “Rootdown” features Fender Rhodes rather than organ, and a flute is prominent.

If there’s any criticism of this set, it’s that it’s over too soon. Happily, the second side of the new LP features a bonus track, an original track called “No Matter where You Go.” There’s nothing wrong with it, and bonuses are always welcome, but it pales in comparison to the irresistible live-mix that has come before. Still, The Live Mix, Part 1 in its current form is a true party record, one that works equally well for close listening as it does serving as the aural backdrop to a spirited get-together.