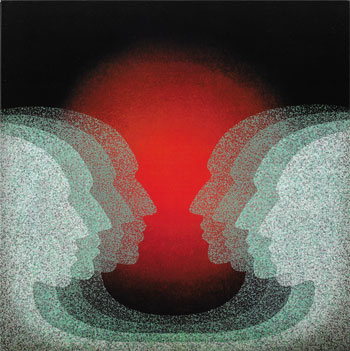 Polyrhythmics are an eight-piece band from the Pacific Northwest. If your tastes run toward ‘70s fuk and soul, the current-day funk-soul revival of (primarily but not always instrumental) bands like New Mastersounds, you’ll luxuriate in the deep groove sounds of this outfit.

But don’t go thinking that Polyrhythmics are also-rand traveling in the wake of the Mastersounds. No, theirs is a unique sound, with a greater exploration of the complex rhythms one might find on James Brown, Maceo Parker and George Clinton records. And guitarist Ben Bloom has a texture all his own; you won’t confuse him for Eddie Roberts.

The sounds on Man From the Future draw from ‘70s soundtrack jazz; just listen to the outro of “Yeti Set Go.” And Nathan Spicer’s plucky Clavinet work on “The Cutdown” may remind you of the kind of grooves laid down by Steve Wonder, Dr. John and other heroes of yesteryear. A crack three-piece horn section digs deep into the melodies, too.

There’s plenty of subtlety here, too: the songs develop, ebb and flow, all without the use of vocals. Sometimes the vibe is hypnotic; other times it’ll elicit rhythmic head-nodding. You’ might even find yourself commenting out loud: “Oh, yeahhh.”

A highlight among many here is “Digital Cowboy. Jason Gray’s rock-solid bass lays own an indelible groove, and Bloom slathers a tasty – yet never indulgent – solo atop it. The horn players turn in a wholly separate melody, and all the pieces fit together nicely. Toward the song’s end some lovely, entrancing synthesizer work appears.

Spaghetti Western guitar and moody organ form the basis of the brief “In the Trees.” Side Two opens with some ethnic texture by way of “Chelada.” There’s a North African vibe to the tune, but other things are happening within as well. Two readings of the title track deliver a soulful feel, with wah-wah guitar a la Isaac Hayes’ Shaft and a lovely trumpet solo from R. Scott Morning. In fact, most all of the music on the LP would be well-suited for use in a soundtrack; it’s gritty with a deep coat of gloss over the top. 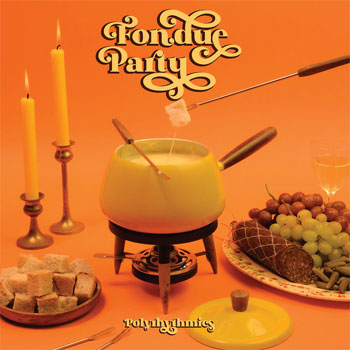 Man From the Future is the band’s fifth long-player, and its first for Color Red, a label that’s asserting a key role in the vinyl resurgence. But it’s not the only thing the group has up its sleeve. 2020 also saw the release of an EP, Fondue Party. With a devilishly dated cover, this five-track 12” EP is designed for playback at 45 r.p.m.

As the title and cover suggest, the EP traffics even more in retro stylings than its companion LP. Arthur Brown’s flute is a key ingredient here, giving the record a feel not miles away from Herbie Mann’s explorations of the late ‘60s and early 1970s. But more modern trip-hop influences inform “Cosimo,” helping pull the record back toward a current day aesthetic.

Sometimes an EP is a placeholder while an artist sorts out his or her next move. Other times it’s a for-the-fans affair, filled with material that hardcore followers will dig, but that might not go over with casual fans. Fondue Party is neither of these; it’s different enough from Man From the Future to warrant its existence. Together, the LP and EP provide a “here’s where we are now” report from the Polyrhtmics. Here’s hoping that live onstage is where they’ll be in 2021.