Kirk Fletcher’s Pathway to (and Through) the Blues, Part Four 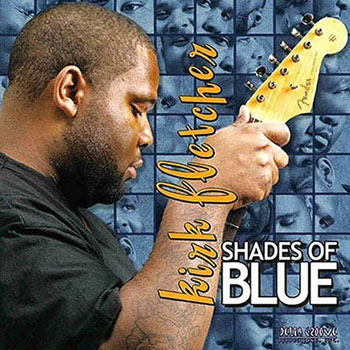 I’m Here & I’m Gone was Fletcher’s attempt at making what he calls “a sort of business card, so I could get gigs.” Looking back on that record, he believes that he wasn’t quite ready to make an album. “I can hear my youth and my love for blues, but I didn’t have that much experience.” Still, he has fond memories of making the album. “It was like, ‘Wow, I’m making a record!’ And in that regard, it was fantastic.”

Featuring Kim Wilson and Janiva Magness, Kirk Fletcher’s Shades of Blue from 2003 was another calling card, he says. “I asked some of my favorite singers to come and sing. It’s me playing guitar with singers. We were just picking a bunch of covers. I’m proud of it, though. It was all I could do at that time.” Shades of Blue was the first record released on Delta Groove, Fletcher says. “Randy Chortkoff started the label to put it out.”

After Shades of Blue, Fletcher wouldn’t make another solo album for seven years, but he was certainly busy. He was an in-demand hired gun, working with and for a dazzling array of artists in and beyond the blues world. His first major gig as a sideman was as a member of Kim Wilson’s Blues Revue. He went on to work with Musselwhite and then briefly with Doyle Bramhall II. He also took part in occasional appearances with pop stars like Michelle Branch and Cyndi Lauper.

From 2005 to 2008 he played lead guitar for the Fabulous Thunderbirds alongside friend and fellow axeman Nick Curran. In 2013 he lent his guitar skills to Eros Ramazzotti’s tour in support of the Italian pop star’s album, Noi. For Joe Bonamassa’s 2016 tour, Fletcher was part of the band, and is featured on Bonamassa’s Live at the Greek Theater. And he emphasizes that he’s extremely proud to have backed up that impressive list of artists. “They’ve all shaped me into being who I am now,” he says. In the space of just over 15 years, Fletcher appeared on more than 20 albums credited to other recording artists.

At the same time, Fletcher continued to record and release albums under his own name. Each represented a move forward, ongoing growth on the part of Fletcher as a musician. And after making two albums on which he only played guitar, Fletcher is a featured vocalist on his third album, 2010’s My Turn.

It’s not that Fletcher didn’t know how to sing before 2010; he just didn’t do it on his records. “I was lazy … and scared,” he admits. “Growing up in the church and being around fantastic singers who are like seven years old, you always think, ‘Oh my goodness, singing? I could never do that!’” But time spent alongside friends, guitarists who could and did sing – like Nick Curran and Gary Clark Jr. – encouraged Fletcher to take the leap.

“Seeing these younger guys be their own man, singing and fronting the band, expressing themselves in a different way than just the guitar can do, singing songs, I felt like there was more freedom in that,” he says. Today, Fletcher’s vocals are fully integrated into what he does on stage and on record. “Now,” he says, “it’s like, ‘Man, it’d be weird to just play guitar!’” 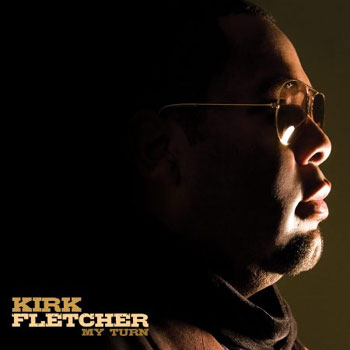 Fletcher’s third album “was the first time I was playing with people my own age,” he says. “I had left the T-Birds, and I wanted to just play guitar a lot.” The album was made against the backdrop of the Great Recession. “There were not a lot of gigs,” Fletcher says. “I couldn’t even afford to pay attention! But making My Turn was a lot of fun because I made it with my friends. Once again, it was all I could do at the time.”

Between 2004 and 2014, Fletcher was a member of the West Coast blues collective The Mannish Boys; he’s featured on all six of the group’s studio albums, alongside other hotshot modern-day blues artists. Led by Finis Tasby (who would guest on Fletcher’s own Shades of Blue) the group also variously featured Kid Ramos, Franck Goldwasser and Bob Corritore.

A 2014 live set, Burning Blues (Live at the Baked Potato) captured the fire and soulful intensity of a Kirk Fletcher live performance. Burning Blues was released shortly after Fletcher wrapped up his tour of duty with Ramazzotti. He says the album is the sound of him “letting [my] hair down, still not singing every song, still finding material. But I tried to do my best. It was just blowing off some steam and wanting to do a live record.”

In the liner notes for 2018’s Hold On, Fletcher describes his fifth album as his first real solo record. “I wrote all the songs, arranged all the music, and sang,” he says. “To me, Hold On is my first real statement as an artist. I really knew what I wanted, the sounds I wanted to hear. I stripped it down: I only had an organ player, a drummer and me playing the guitar,” he says. “I’m really, really proud of that record.”

Both Burning Blues and Hold On were self-released. “I’m a control freak,” Fletcher admits with a laugh. “I like to control everything. And self-releasing can be really good and more profitable, in a way.” But he cautions that it’s not as simple as it might seem. “You have to [financially] invest in yourself. If you just put [a record] out, eight million other people are putting out stuff, you know? And it’s hard to get heard over all of the noise.”

Though he’s pleased with the results of that approach, Fletcher recently inked a deal with Cleopatra Blues to release his latest record. “I was at the point where I wanted to try to get some help,” he says, “with distribution, promotion, and all those things. I figured if I could put my stuff with somebody else, maybe we would share the weight. And that’s exactly what happened.”