Kirk Fletcher’s Pathway to (and Through) the Blues, Part Two

Even as he grew to adulthood and launched a career as a professional musician, Fletcher would remain in California – not in Compton, though – for many years. When he wasn’t touring, he could be found back in the Los Angeles area; his daughter was born and grew up there. But today Fletcher lives in Rüti, a small town 30 minutes’ drive outside of Zürich, Switzerland. When his daughter left for college, it seemed as good a time as any to relocate from California.

But it was love – not of music but of a woman – that brought him there. “We met many years ago when I was playing with Nick Moss,” Fletcher says. “We met then, and got along a little bit, but it was obviously not meant to be. Many years later, we reconnected, and we’ve been together ever since.”

And having spent an extended period touring throughout Europe with pop star Eros Ramazzotti, moving to Switzerland didn’t seem like that much of a cultural change anyway. Before the pandemic, Fletcher returned to Los Angeles every three or four months, and expects to do the same once it’s responsible to travel again. “I’m American,” he asserts. “And my family, my daughter, is there.” 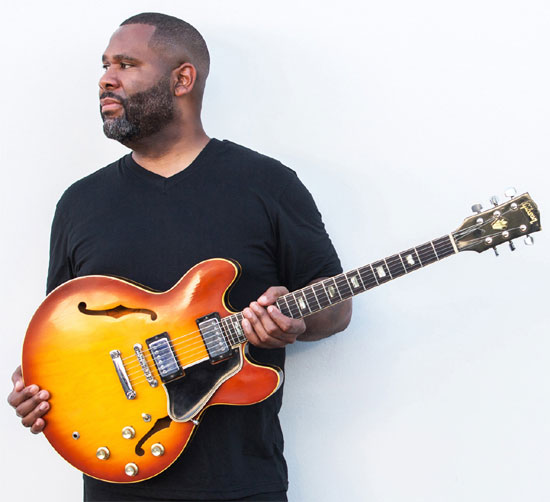 Though he was born in California and is now settled in Europe, Kirk Fletcher’s true roots are back in Pine Bluff, Arkansas. “I was raised almost as an only child,” he says, “because my brothers were so much older than me.” Even though the family had moved west, life remained characterized by what he describes as “country values, those Southern things. My mom stayed at home.”

Yearly trips to visit family and friends in Arkansas were an important part of the family’s routine. And those trips highlighted the contrast between Southern ways and life in California. “A city boy got to see some country living,” Fletcher says with a chuckle. Trips to the South reminded him of “how it was back over in the woods.”

Back home in southern California, it was in his father’s church where a very young Kirk Fletcher first began playing electric guitar in public. He quickly took on a schedule of playing there two or three times each week. “I almost had a whole other career before I started playing blues; I played gospel music for quite a few years,” he says. “And I listened to a lot of gospel music because my dad didn’t want any secular music – blues or anything – in the house.”

The experience of playing in front of people in church – not an “audience,” exactly, but people nonetheless – was something Fletcher enjoyed. “It was always fun, and I always had a good time,” he says. He followed in the tradition of his older brother, Walter Jr., who would play in the church as well. “There wasn’t really an organist or a drummer or anything at first,” he recalls. “It was just people clapping their hands and singing. That’s how I started playing.”

And from the very start, Fletcher was playing electric, not acoustic guitar. “Otherwise,” he chuckles, “you wouldn’t hear it over the crowd!” And though he’d go on to play in full bands, the stripped-down approach that got him started is something that has stayed with him. “People would start screaming or singing; it was so spontaneous. Hearing that three days a week was embedded in my heart.”

When Fletcher started playing guitar outside his family’s church, it wasn’t about earning a living. “It was merely for the love of it,” he says, explaining how his schedule of commitments grew. “They would have an extra church service, and you would go to another church and you would play. Then, a little while later, they liked the way you played or accompanied – or the happiness that you brought the congregation – so they would say, ‘Hey, come here!’ And it really started to build up from there.”

There were things happening in gospel music that made a lasting impression on the young musician. Fletcher recalls that one of the first guitar solos he learned was one by Howard Carroll of the Dixie Hummingbirds. 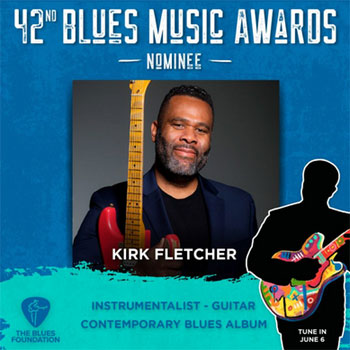 By the time Fletcher entered his teenage years he began to branch out musically, thanks in large part to his brother, Walter Jr., nearly a generation older than him. “That’s really where I picked it up from,” he says. “I was just enamored by his guitar playing, and his sound.”

Having an older brother and “starting to spend more time with him, spending the night at his house, opened me up to his record collection,” Fletcher says. Walter introduced his young brother to “everything from Jimi Hendrix to B.B. King to Van Halen to George Benson to funk,” he recalls with visible pride and admiration. “And I really paid attention to all of that.”

When MTV launched in 1981, Fletcher tuned in; that expanded his musical world in even more directions. “I was able to hear a lot of great guitar players like Prince,” he says. And he continued to absorb it all in ways that would help him to develop his own approach to guitar, one centered on the blues but unencumbered by any arbitrary stylistic boundaries.

TV and radio provided connections to the wider, secular world of music. “It’s hard to stop a kid who’s hungry to hear music,” Fletcher says. “Especially when you have older brothers who buy you a Walkman for a Christmas gift. So from about 1985 to ‘90 I was just constantly playing, and constantly listening … to everything.”

In the ‘80s, Los Angeles radio station KLON-FM’s programming featured a show called Ain’t Nothin’ But the Blues. Hosted by Bernie Pearl (who owned the famous Ash Grove club with his brother Ed), the show made an indelible impression on the very young Fletcher. “That was a really lucky break for me, because he played everything from Mance Lipscomb to Howlin’ Wolf,” he says. “I’m like 8 years old, thinking ‘This is the most amazing thing ever in the whole world!’”