Home  »  blues • interview • new release   »   Kirk Fletcher’s Pathway to (and Through) the Blues, Part One

Kirk Fletcher’s Pathway to (and Through) the Blues, Part One 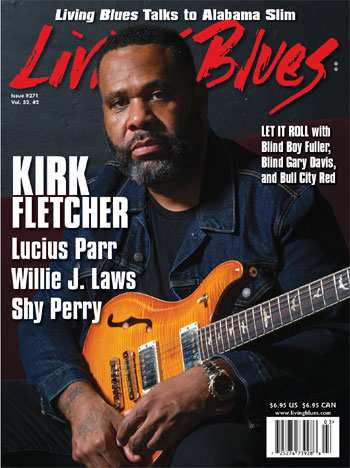 An edited version of this feature was published previously in Living Blues.

Frequent Blues Music Awards nominee Kirk “Eli” Fletcher is known as a lead guitarist, but he considers himself a “born accompanist.” That perspective is in large part the product of his musical roots, playing electric guitar in gospel church services led by his father. But years of musical exploration – taking in myriad styles of music and lending his guitar magic to the work of artists in and outside the sphere of blues – has only served to enhance and reinforce his commitment to the blues. His sixth album, the newly-released My Blues Pathway, is a statement not only of who Kirk Fletcher is today, but of how he got here.

“As long as I can remember, I’ve been in a love affair with the guitar,” Fletcher says. And his musical foundation has two pillars: his church and his family.

Kirk Fletcher’s father Walter was born in 1931 in Pine Bluff, Arkansas, a small town on the banks of the Arkansas River, today a 30 minute drive from Little Rock. At age 16, Walter Fletcher enlisted in the U.S. Army “to get away from an abusive stepfather,” Kirk says. Because of his young age, Walter had to have an adult sign for him before he could join up. Shortly after he enlisted, the Korean War broke out. But Fletcher served his tour of duty, and after a period spent at his uncle’s home Los Angeles, he returned to Pine Bluff.

Ogie Rea Avery was born in 1942 in the same small city. Her family knew the Fletchers; her mother “knew and trusted Walter,” Kirk says. “And after my dad came back to Arkansas, he started to court my mom.” The couple bonded over a shared appreciation of musical artists like Slim Harpo, Jackie Wilson and Sam Cooke. Kirk says that many years later when his family would visit relatives back in Pine Bluff, “everybody told me about all of these guys, like Howlin’ Wolf and Muddy Waters,” Fletcher recalls. “My uncle would be playing [records by] Little Milton and Bobby Bland.”

But Kirk’s mother would be his earliest musical inspiration. “She could sing, and she was a great dancer,” Kirk says. “My mom was always the soul, the musical part of the equation. I talked to my brother a couple days ago, and he said, ‘Man, everything soulful that you have – and everything that you can’t explain about yourself – you got from your mom.’” Ogie Rea was 16 or 17 when she married Walter. Their first son, Walter Jr., was born in 1958. A second son, Cedric, followed within a year.

In 1961, Walter Fletcher moved his young family to the Los Angeles, California neighborhood of Watts. “It’s that classic thing for so many people from the South,” Kirk Fletcher muses. “Some went to Chicago. Some went to Texas, some to Oklahoma. My father already had family in California, so it was a natural thing for him to move to the West Coast.

“My father kind of tossed around for a while,” Fletcher says. “He was just a young man with a family, and as he said, somewhere along the way, he got called to the ministry. ‘God spoke to me,’ is what he said.” He became a minister in the Pentecostal Church. “Holiness,” Fletcher says with a warm, knowing smile. “It was super hardcore: fire and brimstone. No cussing, no drinking.” And music other than gospel was considered the Devil’s handiwork.

That strict religion wasn’t the only hardcore quality characterizing the Fletcher family. Kirk cites a recent reminiscing conversation with brother Walter. “I told him, ‘I know you guys lived in Watts,’” he says. “And he said, ‘Yeah, we not only lived there, we were in church when the riots were going on!’” That, he says, helps illustrate the kind of man their father was: deeply religious, steadfast and resolute.

Walter Fletcher Sr. “was an assistant pastor for a few years,” Kirk says. “Then, he built his own church” in a three-car garage. Services were three nights a week, on Tuesday, Friday and Sunday. But shortly before Kirk was born, the family had moved again. “When I was brought home from the hospital in 1975, I was brought home to Lakewood, California, to a middle-class, predominantly white neighborhood,” he says.

The Fletchers lived in Lakewood, not far from Long Beach, until Kirk was 12. “It was nice,” he recalls. “There were hardworking people there. It was cool, and it was very safe.” Then they relocated yet again. “My dad felt, how could he have a nice house in Lakewood when the Lord’s house was not as good as it could be?’ So, he made the sacrifice to sell our home. That shows you what kind of man he was, too.”

For Kirk’s father, life was about ministry in the larger sense. “My father helped people get away from bad things in their life, whatever [those things] might be,” Kirk says. “You could call him at four o’clock in the morning, and he would come to the hospital. And that’s the way I grew up.”

So the Fletcher family moved again – this time to Compton. “And in 1987, Compton was the absolute top of the mountaintop of crime,” Kirk says. “The crack epidemic and all of these things were going on; you could get shot because of whatever color clothes you got on. We would go to church and [we would hear] gunshots all the time. There were even church members who got caught up in it.”

But his rock-solid family framework helped keep Kirk from straying in the wrong direction. “It was very easy to get caught up in that type of lifestyle, to get pressured into gang activity and things like that,” he acknowledges. “But instead of going that way or being pressured that way, I just went deeper into the music.” By age 15, he would isolate himself in his bedroom. “I’d create my own world inside the house and listen to jazz and blues, and just submerge myself in that. Music started to become my saving grace, in a way, too; I was so connected with it.”