The Solitary Sounds of Snake

For Snake – also known as Oakland musician Nic Barbeln – spontaneity is a key ingredient in the process of making music. Released in late January, the latest Snake album, Wind, captures that character in its twelve dense, moody tracks. “Things just come out of the ether,” Barbeln explains. “When it’s time for something to happen, I have to grab a mic real fast and make it happen.”

That means that many of the sounds captured on the finished recording actually happened outside the confines of a recording studio. And that approach is especially well suited to an artist who nearly always works alone. “It’s all on my time,” Barbeln says. “I don’t even know when it’s going to happen; it just kind of … happens.” 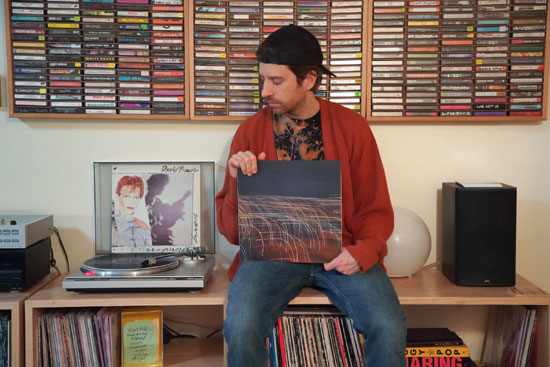 Wind has a signature character, but it’s one that reveals itself in waves, only after presenting the listener with an outlier, the musical equivalent of a red herring. Listeners who spend time with Wind may be surprised to discover that “Outburn,” the album’s opening track, is wholly unlike anything else they’ll hear on the record. Its jangly, shoegaze texture draws the listener in, but once they’re hooked, Barbeln takes them on a journey to other musical destinations.

“At first, I wasn’t even going to put ‘Outburn’ on the record,” he admits. Wind was conceived as an experimental collection, and the tune’s comparatively accessible qualities weren’t necessarily consistent with that. “But I shared it with friends and family, and everyone was super into it,” he says. And eventually Barbeln came around as well, deciding that the tune might be one of the best he had ever written.

So he added “Outburn” to Wind’s track sequence. And in doing so, it completely upended his original idea of what the album would be. He describes the opening track as “something that almost anyone – not just a niche group of people – could get into.”

But listeners who have followed Barbeln’s work since ReRisen – his first album under the Snake banner, released in 2012 – need not worry. Wind is most definitely not a pop album. In fact, the lo-fi, breathy and malevolent “Feel the World” is more in keeping with the album’s experimental nature. The antithesis of what used to be called easy listening, “Feel the World” demands much of the listener.

In its own way, “Feel the World” stands apart from the rest of Wind as well. Reflecting what Barbeln calls “the ‘just coming up with things’ aspect” of his art, he thinks of the track as a way to balance out the more meticulously crafted tracks on the album.

The track is an exemplar of one of Barbeln’s favored working methods: combining material from disparate sources to make an original whole. “Feel the World” began as “a spontaneous voice memo recording that I made while walking on the street in Oakland one night,” he explains. “Then I put it over another recording from somewhere else.” The juxtaposition is unnerving, and the finished track feels less like a song and more like a recited poem that happens to have music.

That quality is in keeping with Barbeln’s emphasis on lyrics. Though you might not know it; throughout Wind, Barbeln’s vocals are buried beneath sheets of sound, to the point at which they seem more like textural elements than a means of expressing ideas in word form.

“I’m very into my lyrics,” Barbeln says with a laugh. “I put a lot of thought into them.” He goes so far as to print the lyrics to Wind’s vocal tracks (ten of 12) on the record’s inner sleeve. But there’s an ambivalence at the core of his work that expresses itself in his production and mixing choices. “I’m also a fan of not being able to hear my lyrics,” he says. “So it’s kind of a paradox.”

If there’s a unifying thread that connects the dozen or so Snake releases, Barbeln suggests that it’s the music’s “spiritual, ghostly” character. Before recording Wind, he says that he used music as a kind of therapy during difficult times. But he feels that the new record documents a new and more expressive phase. “This album is representative of a more universal set of emotions: emotions in general, the whole palette,” he says.

Wind is a more refined effort than earlier Snake releases, but as tracks like the simultaneously hypnotic and pummeling “Antichrist” demonstrate, rough surfaces and sharp edges remain very much a part of the music. Barbeln suggests that the biggest change from his early days may be an increased emphasis on self-editing. “I’m in this new phase where I don’t want to put anything out that I don’t think is totally great,” he says. “Back then, I recorded or archived every single thing I did.”

But mostly for Barbeln, that process of making music at home happens at home; even before the pandemic, live performances of Snake material were a rarity. The music’s personal nature – and Barbeln’s method of creating it on his own – aren’t really consistent with the idea of concerts. “As Snake, I’ve probably only performed five to 10 times over the past 10 years,” he says. But the COVID-era’s growing use of live streaming may push Barbeln in that direction. “Who knows what’s going to happen now?” he says.

Barbeln believes that as he approaches middle age, he still maintains “that punk ethos of ‘not really knowing,’ just feeling around on the fretboard and playing some textures that sound good.” And despite the contemplative, occasionally insular character of Wind, Barbeln says that he isn’t composing solely for himself. “It’s always about the song and its effect on the listener,” he says. “I write songs when I’m having a lot of emotions. If a song is a success, it’s just the translation of whatever state I was in.”

And he’s pleased whenever a listener can connect with the expression of those emotions. “If people catch up on that by listening, then that’s amazing,” he says. “It doesn’t always happen. But when it does, it’s pretty awesome.”