Launched in 2011, San Francisco band Cool Ghouls is celebrating its decade of rock and roll by releasing its fourth studio album, At George’s Zoo. The new record builds on the psychedelic and garage rock textures of earlier records, but it also represents a surefooted step forward. As one of its key members prepared to relocate to another part of the country, Cool Ghouls crafted two albums’ worth of new material. The first, At George’s Zoo, finds the band bending its style in the direction of the Beatles’ Abbey Road.

As is often the case for debut albums, 2012’s Cool Ghouls was in many ways a document of what the band sounded like live onstage. “How we get songs down is by playing them live before we record them,” says guitarist Pat Thomas. “That’s kind of always been our process.” The band used a similar approach for 2014’s A Swirling Fire Burning through the Rye and Animal Races (2016). Cool Ghouls’ other full-length albums, Live at Nice Price Vol. 1 (2015) and 2017’s Gord’s Horse were recorded in front of audiences. 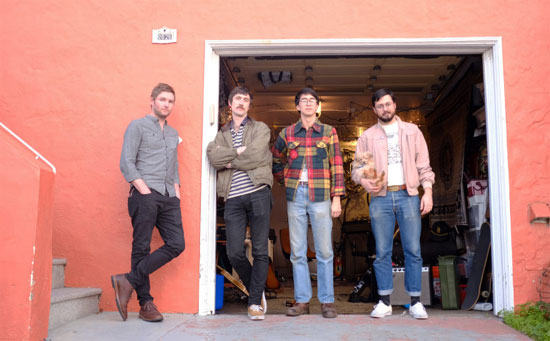 But for At George’s Zoo, the band decided to take a very different approach. For the first time in the band’s career, the musicians have approached an album with the goal of exploring the capabilities of the studio. The result is an album that’s more refined and sophisticated, while at the same time remaining true to the band’s shaggy indie-psych-garage aesthetic.

Rather than road-test the songs, Cool Ghouls developed most of At George’s Zoo’s 15 tracks in the studio. “These songs felt pretty fresh and malleable while we were recording,” Thomas says. “We would rehearse a batch of them in our practice studio a couple days before going in. We were winging it a little more than we had on our previous albums.”

Drummer Alex Fleshman agrees that the new approach bore creative fruit. “It was cool, and it was different,” he says. “And it was just something we hadn’t really tried before.” Experimentation was balanced with spontaneity, too. Fleshman cites “Flying” as a good example. “Ryan [Wong] showed it to us in the studio, and we recorded it 20 minutes later!”

Part of that freedom of approaches was borne of having the luxury of time. Previous Cool Ghouls albums were made by booking a run of several consecutive days in a studio. “But [for this album] we had an arrangement with our friend Robby [Joseph], who was recording it,” Thomas says. “He was looking to get some more experience, so we were just going into his garage.”

That more relaxed approach allowed the band to tinker more with arrangements, and to explore the capabilities of the studio. But At George’s Zoo still features the sound that has earned the band a loyal following. The record displays a newfound “willingness to experiment with things that we aren’t necessarily able to recreate live,” Thomas says. “When we were first starting, I think there was a conscious effort to try to make sure that all the songs were things that the four of us could do on stage.”

At George’s Zoo shows what Cool Ghouls can sound like with those self-imposed restrictions removed. In fact the core band – Thomas, Fleshman, Wong and Pat McDonald – is joined by four more musicians (on piano, sax, violin and trumpet), and the auxiliary players receive equal billing on the album sleeve. Combined with Thomas’ Mellotron on several tracks, the extra musicians help give the album a more polished and nuanced character than previous outings.

The new album expands the group’s stylistic palette, but sometimes it’s tough to discern how much of that is loving tribute and how much is an exercise in irony. “It’s purposely somewhere in between,” admits Thomas. “Surfboard” features sunshine-y Southern California harmonies that recall Jan and Dean, crossed with silly lyrics that conjure thoughts of the Turtles. “Ryan [Wong] is the one who wrote that tune; initially we just had those lyrics in there as a placeholder,” Thomas explains. “We were amused by them, and something about them being funny matched the feeling of that riff.”

And “Surfboard” is the opening segment of a multi-song suite, a Side Two construction that’s clearly inspired by the Beatles’ studio 1969 swan song, Abbey Road. “There was a poster of that album cover on the back wall of the garage,” Thomas says. “I was hoping that you might be able to see it in the background on the album cover, but it’s too dark and faraway to see. But it’s there.”

The suite seamlessly strings together “Surfboard” with two of Thomas’ songs (“Feel Like Getting High” and “Look in Your Mirror”) and a Pat McDonald song, the melancholy “I Was Wrong.” And like Abbey Road, the Cool Ghouls’ masterful studio medley ends with a spare, vocal-and acoustic guitar tune, Wong’s “Living Grateful,” a song that could easily be mistaken for a lost Phil Ochs track.

Fleshman says that the group was unafraid to try things they hadn’t done before. “There was very much a ‘What if we throw a piano on there?’ mindset,” he says. “‘Land Song’ has a bunch of violins and horns. We were ready to change, you know?”

The burst of creativity that yielded At George’s Zoo also resulted in material for an additional album, though a release date hasn’t been set. “Ryan was moving to Denver, and we knew that was coming,” Fleshman explains. “So we felt like, ‘Let’s just record everything that we’ve got!’” The band finished at least 26 songs. For those who enjoy At George’s Zoo, Cool Ghouls’ as-yet-untitled fifth studio set will likely sustain that appeal. “You’ll notice the kinship [between] these records for sure,” Fleshman says.