Grammy-winning “kid-hop” musician Secret Agent 23 Skidoo is both prolific and adventurous. Since debuting with the 2008 album Easy, the Asheville- and New York City-based artist has carved out a unique niche on the musical landscape. SA23S combines pop and hip-hop into a youth-oriented mix, and does so in a way that broadens listeners’ cultural landscape. Like 2017’s Mozartistic, Skidoo’s latest project is in part a collaboration with the Asheville Symphony Orchestra. But Beat Bach Symphonies takes things to a new level.

Calling the new release “more than an album,” Skidoo says that Beat Bach Symphonies is “meant to be a teaching tool for elementary school kids.” And he readily admits that his latest project is a “strange collaboration.” While using analog synthesizers to render classical works is a well-established pursuit (one that began with Wendy Carlos’ groundbreaking Switched-On Bach LP in 1968), folding hip-hop and centuries-old folk tales into the mix truly takes music somewhere it hasn’t gone before. 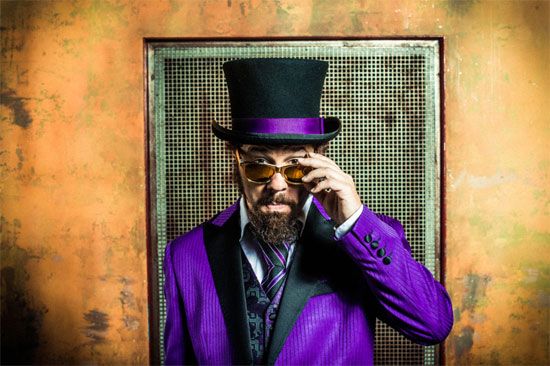 While Skidoo initially considered using the works of the Brothers Grimm, he found that many of tales are rife with misogyny and classism. And when he read William Grimm’s preface to the tales’ first edition, he was horrified to find this passage: “Even the Negroes in Western Africa entertain their children with stories.”

Skidoo was incredulous: “I was like, wait, ‘even’?” So he decided to draw on other traditions, ones with more positive overtones. “I changed the direction of the project and decided to base the pieces on folk tales from the West African, Middle Eastern, Asian, South American, and First Nation North American cultures,” he says. And he would collaborate with musicians and storytellers from these cultures to apply the indigenous instruments of their regions to the Bach melodies.

As he began work on what would become Beat Bach Symphonies, Skidoo collaborated with ASO Executive Director David Whitehill. Once Whitehill announced his departure from the Symphony, his successor, Darko Butorac enthusiastically came on board for the project.

“The hybridization of hip-hop and the orchestra is very smooth,” Butorac says. “Hip-hop is quite structured in its rhythmic foundation; it’s the improvisation and flowing of the lyrics above that foundation that gives the impression of freedom.” He says that the orchestra’s role is to become a part of that foundation, allowing Skidoo to “weave his magic above the sonic carpet.”

Butorac emphasizes what he calls the eternal character of Bach’s music, “as if it is the key to unlocking the deepest mysteries of the universe.” And he believes that Beat Bach Symphonies marks the first time that many of its folk tales have been set to music. “This is a completely unique and original way to approach music education for a symphony orchestra,” he says.

Jamar Woods used an assortment of Moog synthesizers and Arturia “soft synths” for his part of the project. He admits that it was challenging to remain true to the spirit of Bach’s work while adapting it to a new context, but believes that the results speak for themselves. “I hope that both classical music fans and hip-hop fans will both appreciate the end product,” he says.

And that comment underscores an important quality of Beat Bach Symphonies, one it shares with much of Secret Agent 23 Skidoo’s work: its wide, generation-spanning appeal. “As a producer and arranger I didn’t feel it was necessary to cater the music to youth,” Woods says. “This music can and should be for people of all ages.”

And Woods feels right at home with this musical hybrid project. “I was a classical pianist long before I started working in hip-hop,” he explains. “Beat Bach Symphonies gave me a chance to reconnect with music that I’ve loved from a very early age.”

Beat Bach Symphonies will be downloadable from the ASO website, available free to all Asheville City and Buncombe Country Schools, as well as to all charter, private and home school kids in the area. Skidoo calls the album “our gift to the fantastic city that raised us.”