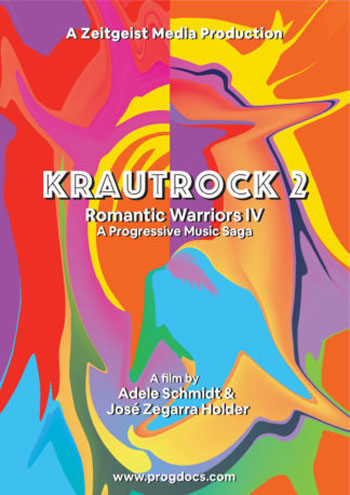 Once you accept that the term krautrock is a big-tent concept, one that encompasses a wide range of music, then you’re prepared to dive farther into an exploration of the style. Yes, it does refer to a certain sort of often-challenging, rarely commercial music originating in Germany, but beyond that, the lines get fuzzy. Safe to say that its depth and breadth are astoundingly expansive, especially when one considers krautrock’s relative level of popularity. EDM or bro country it is not.

So big is it that should one attempt to chronicle the genre in motion picture form, not one but several documentary films would be required. And that’s the ambitious and ongoing project of the Romantic Warriors series by Washington, D.C. filmmakers Adele Schmidt and José Zegarra Holder. I reviewed Romantic Warriors IV: Krautrock Part 1 last summer, and that film successfully whetted my appetite for the next entry.

And now it’s here: Romantic Warriors IV: Krautrock Part 2 focuses on artists from Heidelberg, Munich, Ulm and Wiesbaden. That means that viewers are treated to the music, personalities and histories of important bands like Amon Düül II (and of course Amon Düül from which it came), Xhol Caravan (and its predecessor, Soul Caravan), Guru Guru, Florian Fricke’s Popol Vuh and Kraan.

But the two-hour documentary also digs into lesser-known (but equally intriguing) acts including Witthüser & Westrup, Gila, the rare and pricey book A Crack in the Cosmic Egg, Ohr Records and even a “post-krautrock” band, Electric Orange. And if you didn’t know that acclaimed director Werner Herzog figures prominently into the story, you’ll learn about that as well.

The no-narration, mostly (but not completely) English language film deftly ties all of these (and other) seemingly disparate threads into a cohesive whole. No, Kraan doesn’t sound a lot like Popul Vuh – in fact Kraan often sounds very different from album to album – but it’s all nonetheless connected.

Personalities from the groups are on hand with lively and thoughtful commentary; you’ll instantly be won over by the charming Renate Knaup (of Amon Düül II and Popol Vuh), and when an American shows up (Xhol Caravan’s Skip von Wyck), you’ll enjoy what he has to say as well. And when the film digs into comparatively unknown artists like Electric Orange, you may well find yourself as interested in checking out their music as you are to locate a vinyl pressing of Phallus Dei.

The “rock” part of krautrock is something of a misnomer, of course. The disparate artists under the arbitrary heading owe at least as much to free jazz and experimental music as to rock ‘n’ roll (despite Knaup’s sweet and playful championing of the latter). And Witthüser & Westrup concerned themselves with a kind of freak-folk German style, focusing on religion, mysticism, folk tales and esoterica.

A fair amount of the modern-day action in the film centers around the 2016 edition of the annual Finkenbach Festival. Billed as a sort of German Woodstock, to this viewer it looks like a family-friendly, small-scale music get-together in the mountains that just happens to have a weird, wild and wooly bill of artists. Especially now in a time when we’re all but prohibited from traveling, seeing the Finkenbach footage made me want to jump on a plane. (There is in fact a 2021 festival scheduled for this coming August. We shall see.)

Romantic Warriors IV: Krautrock Part 2 is recommended in the strongest terms. It’s well-made, engaging, unpretentious, and filled with fascinating music. That the filmmakers managed to get it completed and released against the backdrop of the COVID-19 pandemic is a testament to their determination. Best wishes to them as they continue with the project: the next film will tackle some of my personal favorites including Tangerine Dream and Nektar.